Also of note: yesterday's all-time low temperature at Mould Bay is the first all-time low at a long-term observing site north of 70°N since March 18, 2008, when Danmarkshavn in northeast Greenland set its all-time low of -49°F.  (This is based on NOAA's GHCN data, which is reasonably but not entirely comprehensive.) [End of Update]

In recent months and years we've often discussed the extraordinary and persistent warmth around the Arctic Ocean, so it makes a change to consider an episode of extreme cold for once.  This morning the temperature dropped to -66°F at Mould Bay on Prince Patrick Island, which is north of Banks Island and is the westernmost of Canada's Queen Elizabeth Islands; Mould Bay is at a latitude of 76°N.  I've marked the location on a couple of the maps below. 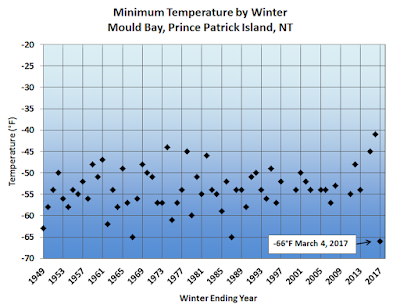 It's interesting to note that today's cold at Mould Bay is not far from an all-time record low for all of Canada's high Arctic region (north of 70°N).  According to GHCN data, only two locations, Eureka and Lake Hazen (both on Ellesmere Island) have been colder, at -68°F and -69°F respectively.

The circulation feature responsible for the cold weather today is a vortex of extremely cold air that has been hovering over the Queen Elizabeth Islands for several days.  Back on Monday the coldest air was over Ellesmere Island, but the vortex has drifted southwestward and the cold has intensified considerably in the past few days.  Bear in mind that of course there is still very little solar heating at this time of year north of 75°N - the sun rose in Mould Bay only 3 weeks ago and reached only 8° above the horizon today.

The map below shows the GFS model's estimate of 850mb temperature today at 1800 GMT or about noon local time in Mould Bay, when the surface temperature was reported as -64°F.  A substantial area of sub-minus 40° air at 850mb is evident from Prince Patrick Island southward over half of Banks Island; this is an extremely cold air mass. 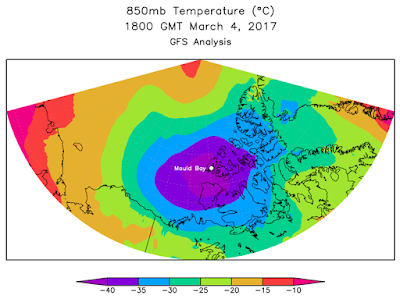 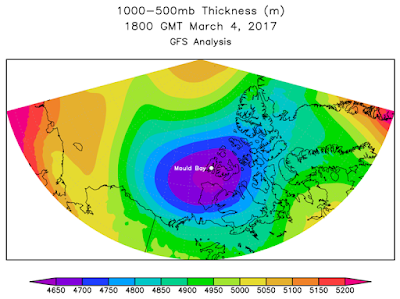 The map below shows the reanalysis-era minimum in 1000-500mb thickness; we see that most of the Arctic basin has seen thickness values below 4650m at one time or another.  However, the second map below shows that only a few selected areas have seen sub-4650m thickness since January 2000.  In other words, the kind of cold we're seeing today in northwest Canada has become rare in the past couple of decades; this is a really extreme and notable event.  It's remarkable and very interesting to see this event occur at the end of what has otherwise been a winter of record-breaking warmth in the Arctic. 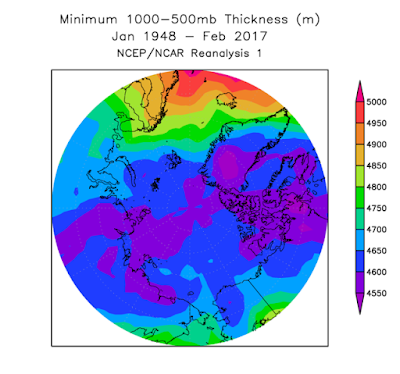 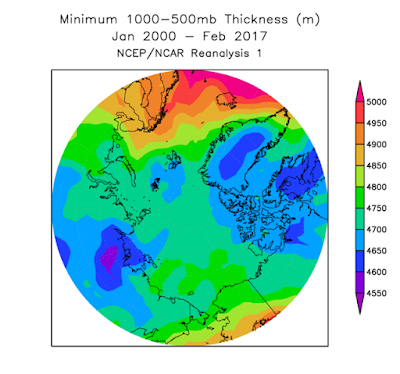