A major warm-up is under way at last across the eastern interior, as the flow has finally gone around to the south; Eagle is up to 46°F this evening, and Fairbanks is expected to break the freezing mark by Friday at the latest.  This will prevent a significant record from being broken: Fairbanks has never seen a March without the temperature rising above freezing at some point in the month.  The closest was in 1997, when the month's high temperature was only 34°F.

[Update March 31: the temperature has risen above freezing at Fairbanks airport as of 11:30am AKDT.  This is the 3rd latest appearance of the first above-freezing temperature in March.  In 2006 it occurred at 1pm on March 31, and in 2007 the thaw began at 2pm on March 31.]

The last time that above-freezing conditions were observed either at the surface or in the air column above Fairbanks was on February 26, so the period of having a continuously sub-freezing atmospheric column will end at about 30 days.  The longest such period this winter was 46 days, from mid-November through December 30, and this was considerably longer than any of the past 3 winters.  The chart below shows the length and ending date of each winter's longest stretch of sub-freezing conditions (both surface and aloft) back to 1948-49.  (Click to enlarge the chart.) 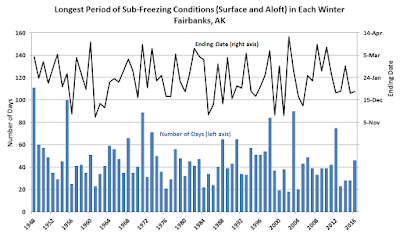 It's a funny coincidence that 4 of the last 5 winters have seen the longest sub-freezing spell come to an end very close to the end of the year (December 27-31).  Reader Eric first pointed out the similarity in timing of cold and warm spells between this winter and last (see here), and in fact a distinct warm-up can be identified near the turn of the year in each of the past 5 winters.  We'll call it the New Year's Thaw and I'll look at it more closely in a future post.