Following on from the last post, here's a quick look at the seasonal maximum in snow water equivalent in Fairbanks, as measured at the airport and at the Snotel site (off College Road and not far from the Fairgrounds, according to Rick Thoman).  The automated Snotel instrument monitors snow water content via a pressure pad, whereas the airport measurement is done manually as part of the daily observing routine.  The two time series track together pretty well, although there was a big discrepancy in 2013-14. 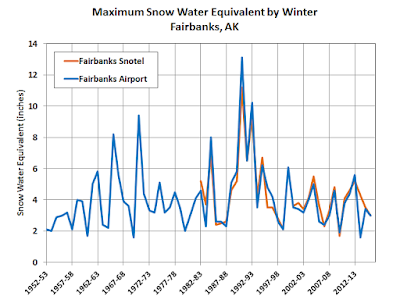 The overall downward trend since the early 1990s is rather noticeable, although of course the interannual variance is very large.  So far this winter the SWE has reached 5.2" at the Snotel site; again we see that while this is above normal, it's not highly unusual compared to the long-term climate of Fairbanks.