Yesterday NOAA released the U.S. climate division monitoring data for March, and the results for Alaska show a bit of a puzzle.  I was expecting to see significantly below-normal March temperatures for most of the state and a significant warm anomaly for the North Slope district.  However, it turns out that the climate division data show the North Slope division with a -3.0°F anomaly relative to the 1981-2010 normal, and -1.3°F relative to the 1925-2000 normal (as shown in the map below - click to enlarge; note that the normal is 1925-2000, not 1901-2000 as stated in the legend). 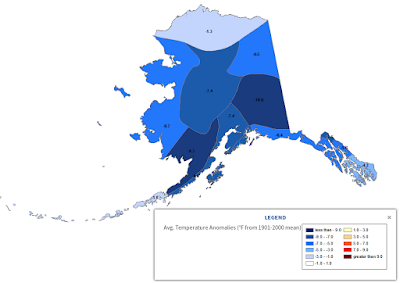 In contrast, the graphic below (courtesy of Rick Thoman) shows that Barrow, Deadhorse, and Umiat all saw temperatures in the upper two-thirds of the 1981-2010 distribution; the month of March was significantly warmer than normal at these sites and almost certainly at many other locations north of the Brooks Range. Here's a time series of the March mean temperature in the North Slope district according to the climate division data: 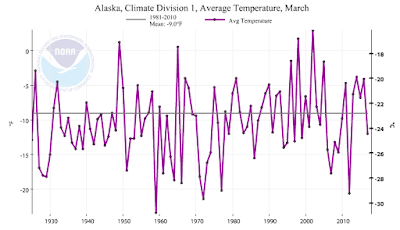 Oddly the March 2017 temperature is well below the March 2016 temperature, even though Barrow and Umiat were warmer this year than last year in March.  Looking back over the past 5 months (November-March), the same discrepancy is observed: the climate division data indicate that this winter was colder than 2015-2016, but in fact this winter was the warmest on record at Barrow and appears to have been warmer than last winter at Umiat too (although there is a fair amount of missing data). 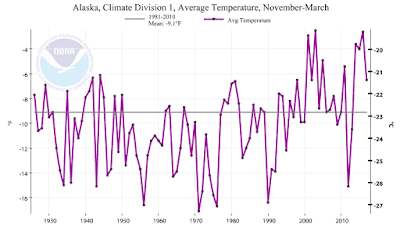 The two charts below show a closer comparison between the two winters for Barrow, Deadhorse, and Umiat.  The January through March mean temperature was slightly cooler this year, but November and December were much warmer this winter than last winter.  Notice the +54°F daily temperature anomaly at Umiat on January 2 of this year: with a high temperature of 38°F and a low of 29°F, this is the largest departure from normal of any day in Umiat's history.  The 1981-2010 normal for Umiat on January 2 is -20°F, the lowest of any station in Alaska for that date. 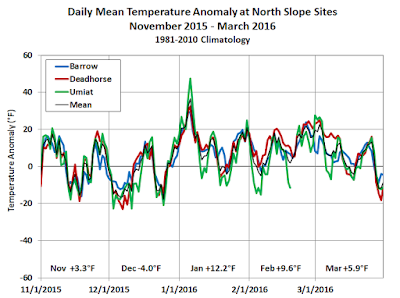 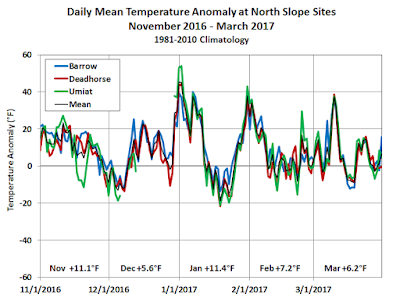 What can we conclude from all of this?  First, it's plain to see that climate monitoring is a challenge in the data sparse regions of northern Alaska; different analysis methods can give very different answers even for something as "simple" as year-to-year temperature changes.  It's possible that NOAA's methodology for the climate division calculations allowed this winter's North Slope result to be influenced by colder temperatures south of the Brooks Range and outside the boundary of the district; this would be unfortunate, but these kinds of issues are not uncommon in the world of near-realtime climate monitoring.

An interesting question to consider is, was this the warmest winter on record for the North Slope as a whole?  According to the climate division data it wasn't even close, but my cursory analysis of the numbers from Barrow, Deadhorse and Umiat suggest it may well have been so.  A more thorough investigation, including a careful accounting for missing data, and additional observing sites, would be required to say anything with greater confidence.