Rick T. here with a post about snowy weeks in Fairbanks.

Interior Alaska has a long snow season, easily from late September to early May, and occasionally even longer. The average number of days between the first measurable snow in the fall and last measurable snow in the spring is a bit shy of seven months (202 days). But of course, the snowfall is not evenly distributed during that time. On the seasonal timescale, early winter is, on average, much the snowiest time of year, while March and April are the climatological dry season. On shorter time scales, depending on what's happening with the flow aloft, we go through days or weeks that are drier and then snowier. However, over the years it sure seemed to me that a significant fraction of the seasonal snowfall comes in a relatively short window. Is that so, or is it just my back complaining from too much shoveling? To address that question, below is a plot of the maximum 7-day snowfall as a percentage of the winter total, i.e how much of the winter's snowfall fell in the snowiest week (any 7-day period) for the Weather Bureau/NWS era of observations (since 1929-30). 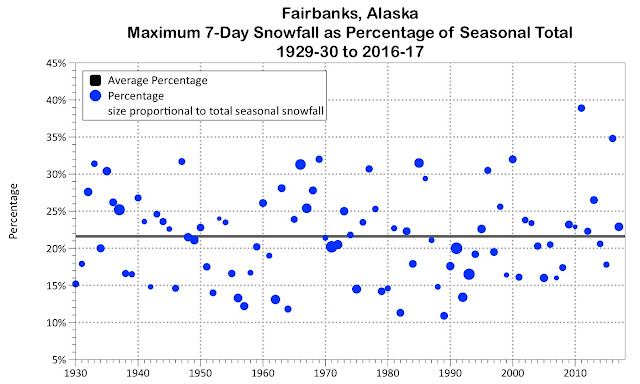 As I expected, a fair chunk of the total snowfall does indeed fall in short stretches. The 88 winter average is that almost 22 percent of the seasonal total falls in some seven day period. Although not statistically meaningful, it is interesting that the two highest percentages have occurred since 2010 and that there have been no winters since the early 1990s with unusually low (compared to the long term average) weekly snow percentages.

A surprise to me was the lack of correlation between the total seasonal snowfall and snowiest week. In the graphic, each year's dot is sized according to the total seasonal snowfall: bigger dots indicate higher seasonal totals. Just eyeballing it you can see the size of the dots varies randomly above and below the average line (correlation only +0.03, effectively zero). I expected that low snowfall winters might tend to have higher percentages fall in a few days, but this analysis says otherwise.

Inspired by Richard's question on extremes of timing of the snowiest week, here's a histogram of the date of the the snowiest week by half-months. Note that there is no well defined peak: the late November spike is likely no more than random variability. 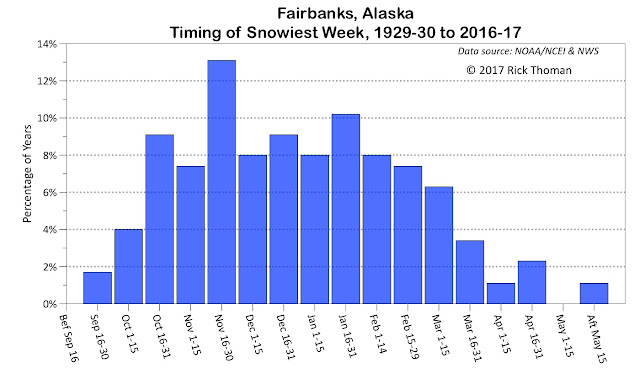 And for completeness, here's a histogram of the amount of snow that fell in the snowiest week each winter. Not surprisingly, there is a concentration of values around a foot but with a long tail of higher amounts. 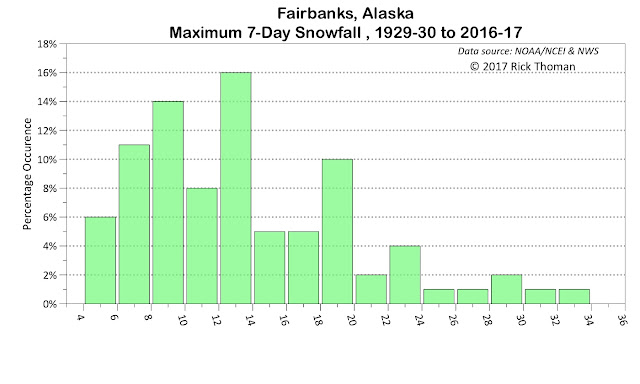