After a cold March (14°F below normal), Fairbanks has seen warmer than normal weather overall this month so far (4°F above normal).  Recent days have been relatively cool, however; the high temperature was only 35°F on Wednesday, compared to a normal of 47°F.

Total thawing degree days (accumulation of mean daily temperatures above freezing, in Fahrenheit) are up to 48 as of yesterday, which is the lowest for the date since 2011 and far behind last year's near-record pace.  However, we're actually only a couple of days behind the normal pace for thawing.  The snowpack is diminishing steadily and river ice is starting to look a bit rotten.


Today is the average date that the winter snowpack melts out in #Fairbanks. Not this year, but it's going fast now. #akwx @Climatologist49 pic.twitter.com/RTYUEwPbGk
— Rick Thoman (@AlaskaWx) April 22, 2017 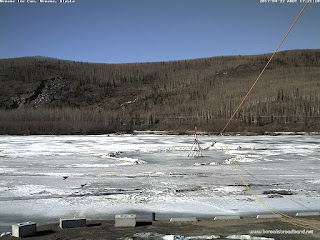 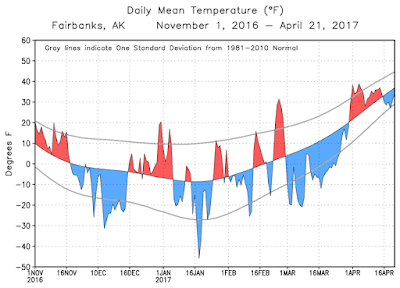 The chart below shows daily statewide maximum and minimum temperatures for the last several months according to data from NOAA's ACIS tool.  I've excluded Snotel stations, and for maximum temperatures I also removed RAWS sites because of their known warm bias in sunny weather.  It's striking to see the dramatically higher variance of statewide daily minima compared to maxima; this is largely because the warmest parts of the state in the cold season have highly maritime climates and therefore low temperature variance in comparison to the much colder continental areas. 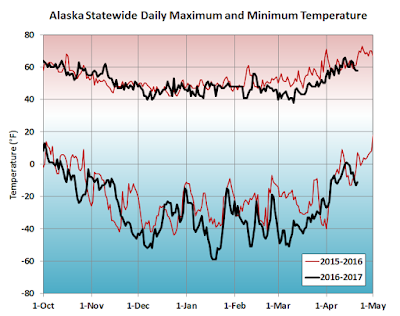