Does Wet=Cool in Summer? The Fairbanks Evidence

Hi, Rick T. here. On Friday's ACCAP monthly Alaska Climate Outlook Webinar, the question came up afterwards about whether the Climate Prediction Center's June through August 2017 outlook of both a warm and wet tilt in the odds over a large part of mainland Alaska was reasonable, on the idea that if it's a rainy (dry) summer, then would not it be more likely to be cool (warm)? So I thought it would be worth reprising that question here on Deep Cold.

Below is the basic Fairbanks evidence in the form of a scatterplot. For summer precipitation I'm using the Standardized Precipitation Index (SPI). The SPI is widely used in drought assessment  and is extremely useful for comparing precipitation anomalies for regions with quite different climates (say, Fairbanks vs. Yakutat). However, it's also a handy way of characterizing anomalies at a single locations, since the SPI  effectively takes into account the distribution of precipitation amounts, which very often do not follow a bell (Gaussian) curve and turns the anomalies into standard deviations. For temperatures, which at the monthly and seasonal scale usually do follow a bell-curve distribution (in the absence of trend), standardized anomalies are just the observed minus the long term average, and that difference divided by the long term standard deviation.When we work-up those statistics for each summer during the Weather Bureau/NWS era at Fairbanks (using the full 1930-2016 record as the baseline), here's what we get. The summer SPI is on the vertical axis and the summer temperature anomaly is on horizontal axis. The red dashed line is the linear correlation, which is significant, and does lend support to the idea that warm summers (right-hand side of the plot) do trend to be dry, while cool summers due tend to be wet. 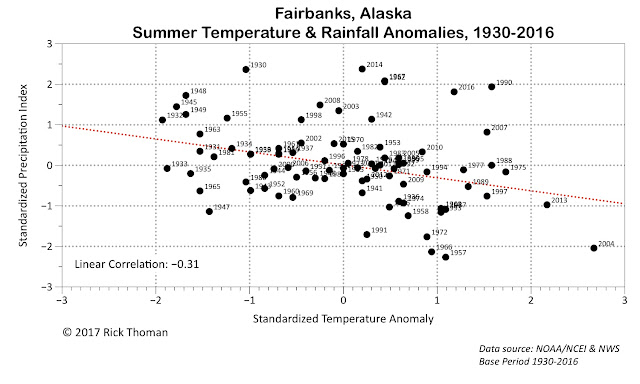 That's all well and good, but with 87 data points it's kind of hard to make out the details. Since we're interested in the warm/dry and cool/wet idea, here's the same plot, but I've masked out all the points in the "near normal" category (using the three-category characterization, so ±0.43 standard deviations) and colored the quadrants that correspond to the four combinations of significantly wet/dry/warm/cool. 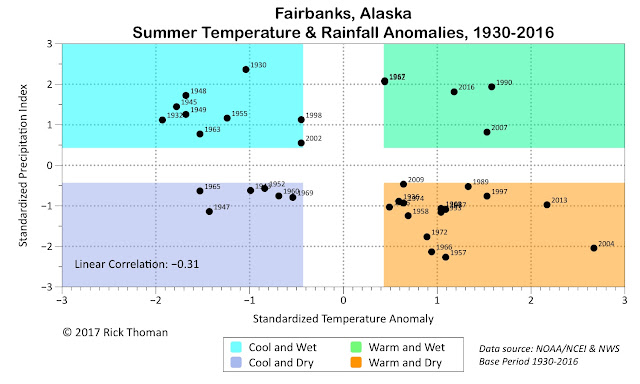 From this it is much clearer that there have been summers that have been both warm and wet overall (e.g. just last year, upper right quad) and summers that have been cool and dry (e.g. 1947, lower left quad), but clearly wet and cool or warm and dry are much more favored. It's very hard to read in the plot, but by this measure there have been no "cool and dry" summers (lower left quad) in Fairbanks since 1969. Upon reflection, this isn't  surprising, since we all know there is a very marked trend in June through August average temperatures. 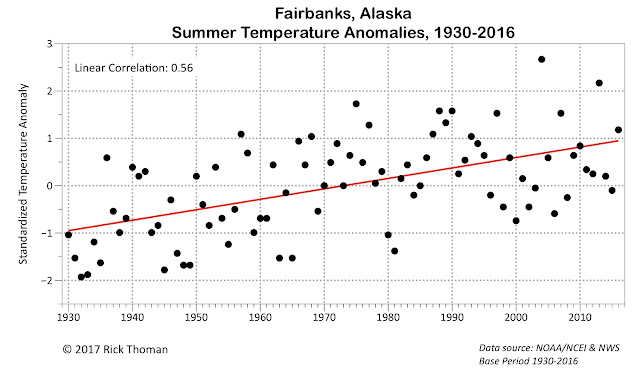 We can make some account of the current climate by using a more recent baseline period for temperatures (there is no multi-decadal trend in summer rainfall). Since the Climate Prediction Center is basing the outlook on the 1981-2010 reference period, we'll use that. We can also adjust the correlation between rainfall and temperature to take into account the temperature trend (by using generalized least squares regression). When we make those changes, we get this: 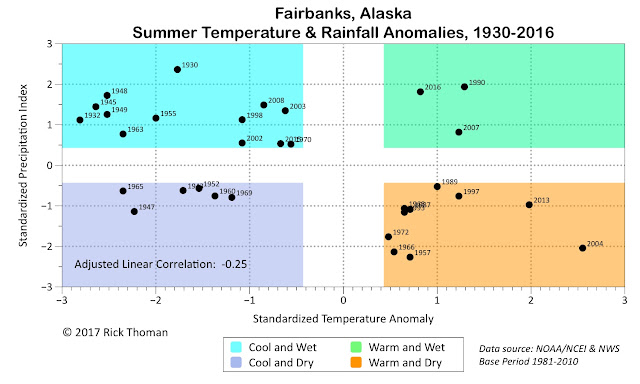 So we see the overall correlation between summer temperature and precipitation is weaker (but still significant) and that the modern criteria of what a warm and wet summer wound be really are an unusual combination. Come back in September to see how the outlook worked out.

Update: A couple of folks have asked about how wildfire activity fits into this, so here's the basic temp vs. rainfall anomaly plot with the million acre plus seasons highlighted. In this view, only two seasons, 2002 and 2015, had significantly above average summer rainfall in Fairbanks and also burned a million acres or more (statewide). 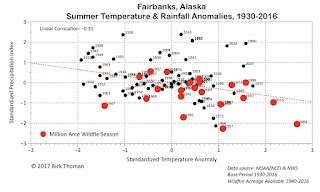