Break-up is essentially complete now on the Tanana and Kuskokwim Rivers and is under way on the Yukon River; the Yukon ice moved out on May 3 at Dawson, May 4 at Eagle, and today at Circle.  These dates are very close to long-term normals.  The tripod at Nenana fell on May 1, which is also about normal, but Bethel's break-up guessing game ended on May 6, a few days ahead of normal. 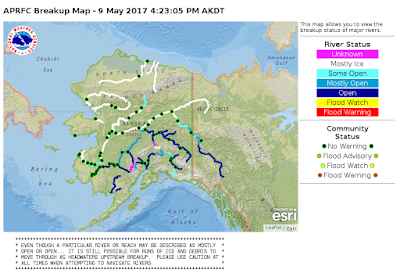 As we've noted before, the long-term trend towards earlier break-up is less statistically significant at Bethel than at Nenana.  There are two reasons for this: first, the (assumed linear) rate of change itself is smaller at Bethel, and also the inter-annual variance is greater at Bethel.  However, the early break-ups of recent years (2014-2017) have been much more unusual at Bethel compared to long-term norms.  The reason for this is probably the proximity of Bethel to the persistent and very unusual warmth in the northern Pacific Ocean. 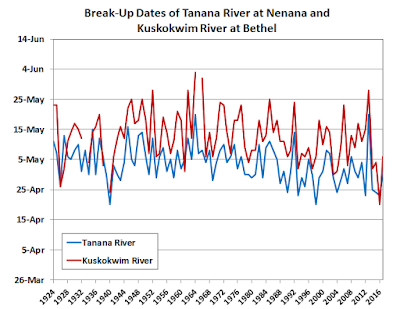 While we're on the topic of variance and spring warming, here's a very interesting chart that Rick Thoman sent over, showing the long-term history of the first date of 65°F or higher in Fairbanks.  The three trendlines represent linear regression applied to the 90th percentile (blue), the median (green), and the 10th percentile (orange) of dates.  While the trend lines for median and early (10th percentile) warmth have advanced over time as expected, the 90th percentile has barely changed.  This implies that the variance has increased quite substantially.  While this could perhaps be a statistical quirk of this particular temperature threshold, it's an interesting result that deserves further investigation. 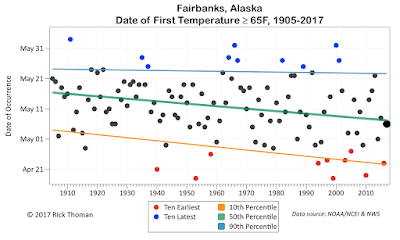