The heat is on across the interior today, with temperatures pushing up to 90°F in some spots.  The map below shows the high temperatures through about 5pm; note that RAWS thermometers tend to run several degrees too warm on days like this, so most of the low 90s are probably erroneous.  Nevertheless, at 5pm it was a very consistent 89°F at Fairbanks airport, Fort Wainwright, and Eielson AFB. 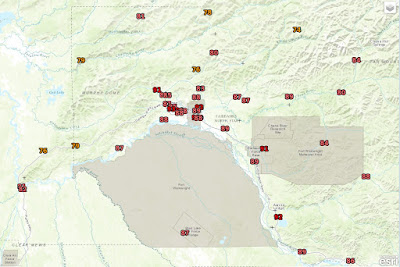 It's hard to imagine, but temperatures on the eastern North Slope this afternoon are actually below freezing; Barter Island has been hovering around 28°F all day.  It was 23°F in Barrow this morning with clear skies and a strong breeze; it was a beautiful scene, but amazingly cool considering the heat on the other side of the Brooks Range. 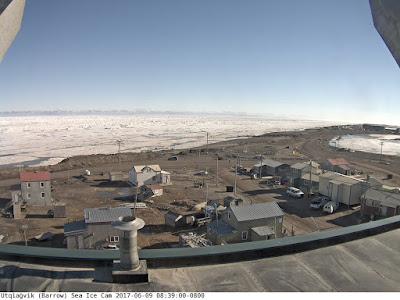 The temperature difference we're seeing here between the North Slope and the interior is right at the limit of what has been observed historically at this time of year; for example, the largest difference in daily high temperatures between Fairbanks and Barrow is 58°F in June, and it looks like today's difference will be about 55°F (90°F vs 35°F).

The largest summer-time same-day high temperature difference between Fairbanks and Deadhorse/Prudhoe Bay is 55°F, which occurred in the late June heat wave of 2013 (92°F in Fairbanks, 37°F in Deadhorse).  With the temperature reaching only 32°F so far today in Deadhorse, the record may be broken.

Email ThisBlogThis!Share to TwitterShare to FacebookShare to Pinterest
Labels: Heat