Last week's post on Chukchi Sea ice (or lack of it) prompted me to look back at the past winter and examine just how warm it was around the Arctic Ocean.  Back in April we saw that the warmth was quite extreme compared to normal (see here and here), but let's look at some alternative data sets to get a sense of the magnitude of the anomaly.

First, here's a map of the October-April mean temperature anomaly, i.e. departure from the standard 1981-2010 normal, based on the NCEP/NCAR reanalysis.  This is the 2m temperature output from the reanalysis model - so it does not represent ground truth observations, but nevertheless it's useful.  The amplitude of the anomaly is extraordinary, greater than +6°C over a broad swath from the Chukchi Sea to the area around Franz Josef Land, and over +10°C in parts of the latter region.

The NCEP/NCAR reanalysis is rather outdated now (the model is over 20 years old), so it's worth looking at some more modern alternatives.  Here are the results from a couple of other reanalysis products: 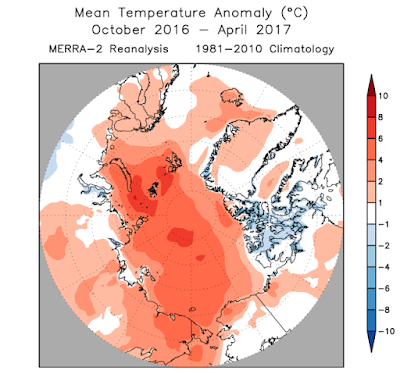 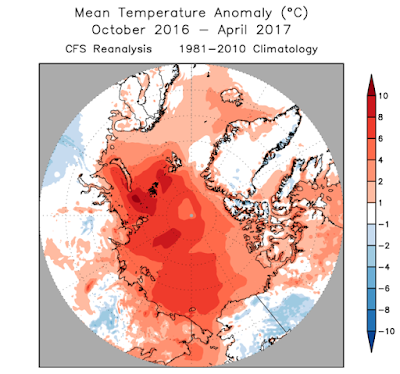 While there are some modest regional differences between the maps, with MERRA-2 in particular showing less extreme warmth over the Arctic Ocean, the patterns are qualitatively the same.  Moreover, all three models show that the seven months ending April 2017 were the warmest such period in the Arctic region for the entire reanalysis period - warmer even than winter 2015-2016.  The chart below shows the 65-90°N area average of the 2m temperature anomaly according to the three reanalyses.  Despite the models showing some differences in the long-term trends, they agree that the past two winters were much warmer than any others in the modern era. 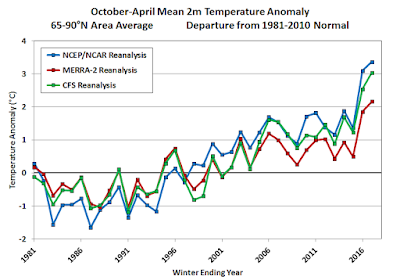 The obvious next question is - what about actual temperature measurements?  Do thermometer readings at weather stations support the huge warm anomaly produced by the models?  Based on a set of 19 long-term observing sites that I've used previously on this blog, the answer is unequivocally "yes".  The chart below shows monthly mean temperature anomalies from these Arctic sites, and remarkably the 19-station mean temperature was over 3°C above normal for each month from October through April this winter.  (But note that in May the average temperature returned to almost exactly normal.) 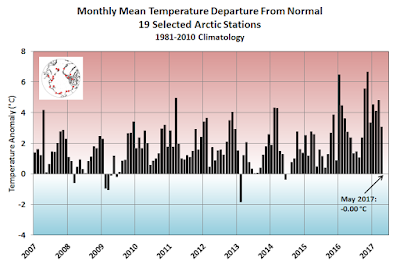 If we compare the observed temperature anomalies (from the 19 stations) with the reanalysis model temperatures, it's rather amazing to see that the station data shows even more warming than the models, and winter 2016-2017 was warmer than 2015-2016 by a larger margin.  Of course the stations are not evenly distributed around the Arctic - we could especially use a few more in the Canadian Arctic - but it does seem possible that the models may actually be underestimating the magnitude of warming. 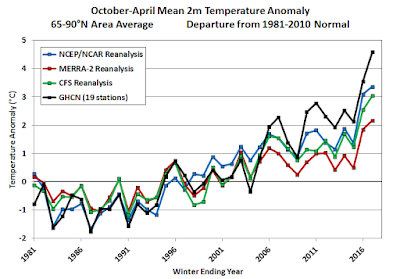 Finally, the area-average reanalysis temperatures from the high Arctic, 80-90°N, show a 7-month average temperature anomaly of approximately 4-6°C above normal, which is greater than for the Arctic basin as a whole.  Of course this represents a very small area of the Earth's surface, but it's a striking anomaly nonetheless.  It's no surprise, really, that estimated Arctic sea ice volume at the end of May was about the same as the normal ice volume for the month of July (see the figure below). 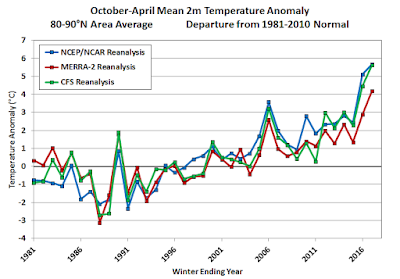 A reader pointed me to the reanalysis intercomparison tool at NOAA ESRL, which I've seen before but had forgotten when I put this post together.  Happily, the NCEP/NCAR reanalysis and MERRA-2 results from NOAA's tool appear to be identical to mine: 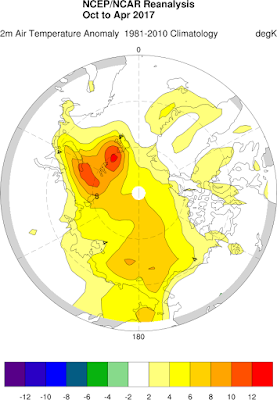 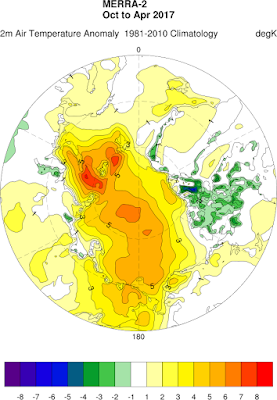