Following up briefly on the last post, temperature data from the Atigun Pass SNOTEL provide a bit more context for the rather chilly conditions observed at this high-elevation site in recent days (down to 17°F on Wednesday).  Historical temperature data go back to 1999, although prior to 2006 there is only one data point provided per day - the temperature at midnight.

The chart below shows the accumulation of freezing degree days through August and September for each year since 1999 (calculated with only the midnight temperature throughout, for consistency).  The black line, indicating this year's pace of freeze-up, is a little ahead of the 18-year normal, but only by a few days, and the early chill this year has been much less severe than in 2000 and 2002. 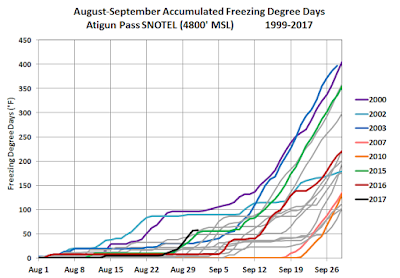 Looking just at August total FDDs, the data from the early years confirm what I suspected - that the apparently cooler August conditions of the past few years are not unusual relative to a longer history.  From this perspective, the relative absence of chill in a number of years from 2004-2012 seems more unusual. 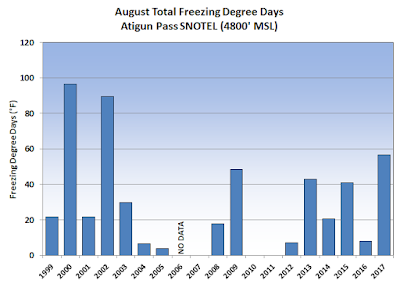 A longer and higher-quality history of temperature data is available from Toolik Lake Research Station, just 40 miles farther north up the haul road - and while this site is not quite in the mountains, the elevation at Toolik is still a respectable 2500'.  The chart below shows August FDDs at Toolik, confirming that recent years have brought freezes closer to the long-term normal, although not as severe as in some of the earlier years. 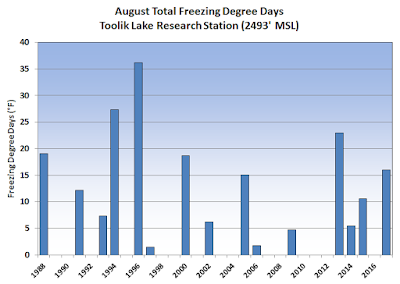 What could explain the early arrival of autumn chill in the Brooks Range in recent years?  The 500mb height chart from Wednesday provides a clue: notice the strong, cold upper-level trough over the North Slope.  More analysis would be needed to be sure, but it's likely that recent years have seen this kind of feature relatively more often at about the same time on the calendar. 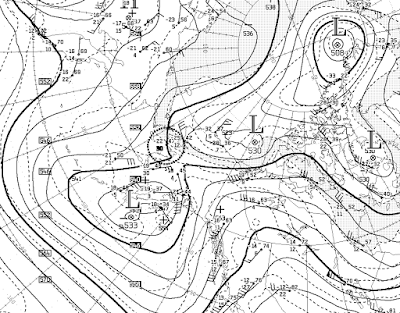 Finally, lest we be tempted to infer that Arctic-wide conditions are cooler now than in recent years, the latest Alaska-centric sea ice analysis shows open water for more than 300 miles north of Barrow.  Arctic sea ice extent won't set a new record low this year, but it is still far below the long-term normal, and estimated ice volume is tracking near record lows.  More on that another day. 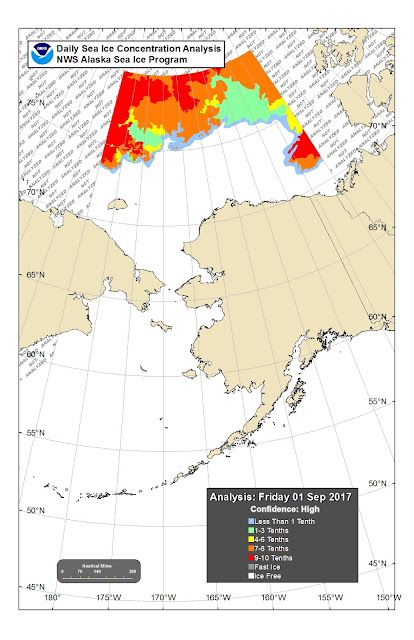