Rick T. here with a quick follow-up on Richard's post on Friday with the first snowfall of the season at Fairbanks Airport. Below is a plot of the date of first snow (any amount) each autumn since 1904, along with the regression plot for the 10ᵗʰ (very early), median and 90ᵗʰ (very late) percentiles. Note that this list aims to give the first snow date exclusive of convective hail. Unfortunately, snow and hail have been lumped together in the US climate record since early 1950s, so a "snow only" time series for Fairbanks requires a little bit of QC.

Prior to 1930, when the Fairbanks observations were done by cooperative observers, it is quite likely that snowfalls like the Friday morning occurrence (mixed rain and snow for a few hours in the middle of the night, no accumulation) would have not been reported, so some of the pre-1930 dates are quite likely later than would now be recorded. Even in the post-1929 Weather Bureau era, around-the-clock observations did not start until World War 2, though there were observations made every six hours, so there was a "middle of the night" presence. 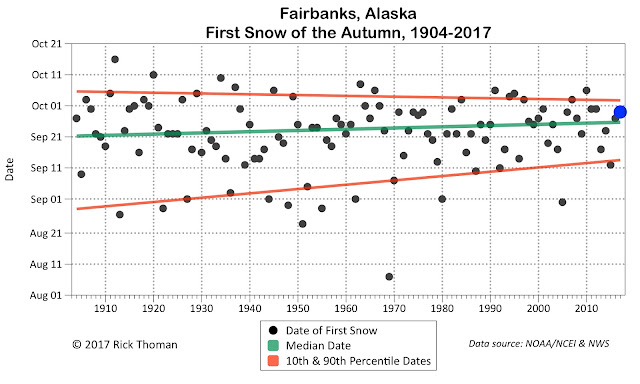 The regression analysis shows practically no change in the median and very late dates over the past 114 years. I've plotted the regression slopes, but neither the 90th (top red line) or median (green line) pass statistical tests that would allow us to say with high confidence that the slope (i.e. trend) is really different than zero. In light of the probable "late bias" in the pre-1930 data (at least in aggregate) the 90th percentile seem likely to me to have no trend, while the same bias would serve to "push down" the left side of the median date, i.e. increase the century scale slope a little (though this is quantile regression, so it's less sensitive to outliers than ordinary linear regression).

The big change is obviously in very early "first snows" Prior to 1980, a first snow before Labor Day, while not common, occurred 11 times in 75 years. However, in the past 30 years that has occurred just once. The 10ᵗʰ percentile (bottom red line) can be thought of as the date for which there is a ten percent chance in a given year that the first snowfall would occur on or before that date. So prior to WW2, there was about a ten percent chance of first snow September 1ˢᵗ or earlier. Nowadays, we have to get to September 10ᵗʰ or even a bit later to get to the same threshold.
Posted by Rick at 10:06 AM