The equinox is now behind us, but only in the past few days have temperatures in Barrow (or Utqiaġvik) begun to make regular excursions below freezing.  Of course this isn't too surprising with a vast expanse of open water to the north; the Arctic sea ice edge to the north of Barrow is about 500 miles away. 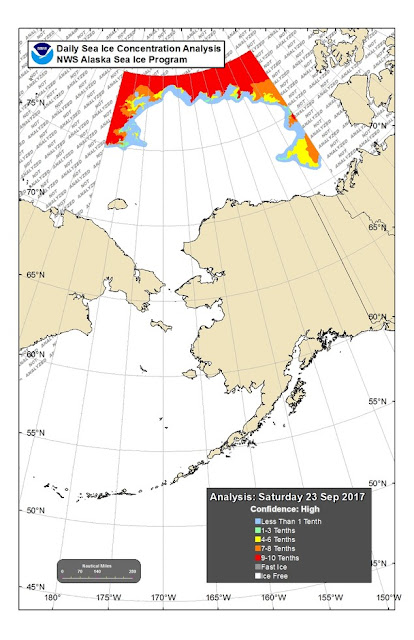 We've looked at this type of thing before, but curiosity led me to re-examine the average temperature around the year in Barrow when the wind is blowing from a northerly component; see the chart below.  The purple line at the top shows the warming that occurred between the 1951-1975 and 2001-2016 periods. 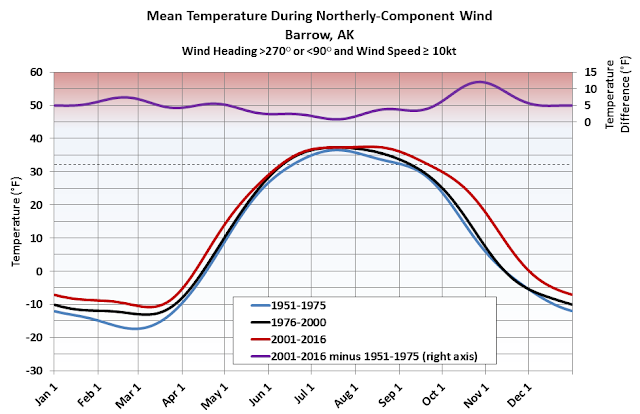 It's interesting to observe that for 1951-1975, winds with a northerly component tended to bring sub-freezing temperatures beginning in early September, but that date has been pushed back to the equinox in recent years.  The warming has been more pronounced in October, of course, as the heating effect of open rather than ice-covered ocean becomes greater the colder it gets.  The difference between 2001-2016 and 1951-1975 peaks at about 12°F in late October for winds with a northerly component.

Another way of looking at the change is to consider the latest date in the year when a temperature above freezing was observed in combination with a northerly-component wind.  Prior to 1995, early October was about the latest that this ever happened, but since then it has been rare to see the last such date before the end of September; and there have been several very late outliers, including January 10, 1997. 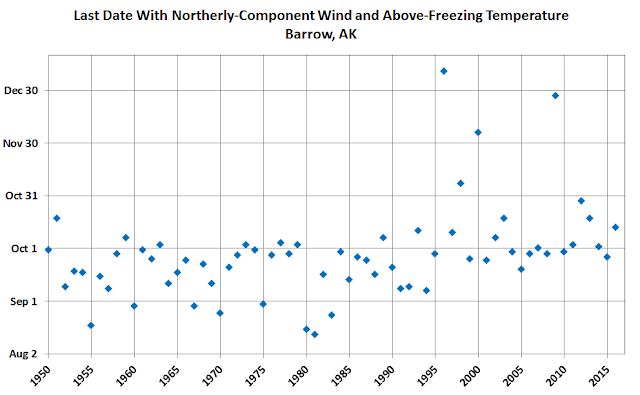 Below is a pair of contrasting sea ice extent maps to illustrate the change: yesterday versus the same date in 1983, when the Beaufort Sea coast was already locked in with sea ice.  It's no surprise at all that NOAA's Climate Prediction Center is predicting a 75% chance that Barrow's October mean temperature will be significantly higher than the 1981-2010 normal (i.e. in the upper tercile); see the third map below.  This may even be conservative, as only 2 of the last 11 Octobers have failed to be at least this warm. 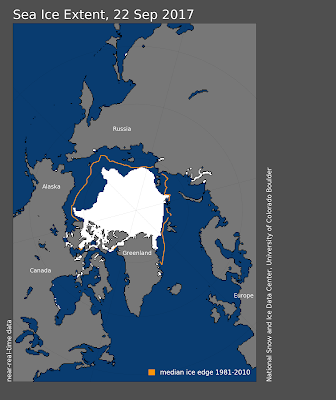 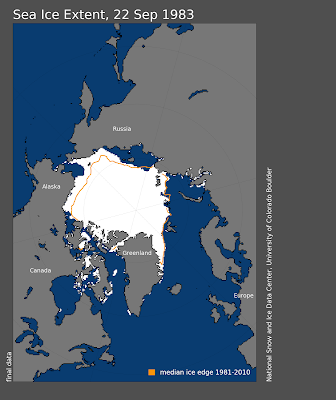