The air temperature is much more seasonable across interior and northern Alaska today, courtesy of a strong cold front that pushed its way across the state on Sunday.  Here's yesterday morning's 500mb map, showing the associated upper-level low over the North Slope (click to enlarge). 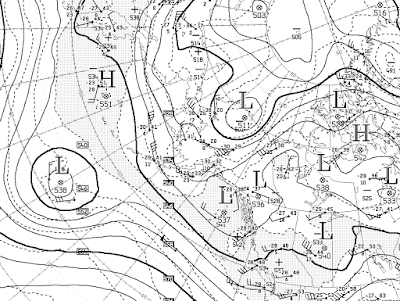 Fairbanks has seen a high temperature of "only" about 17°F today, but this is completely normal for the time of year.  It's quite a dramatic change, however, as this is the first day with a sub-freezing high temperature, and prior to Saturday the coldest day had a high of 37°F.

The sudden change to colder got me thinking about the statistics of sudden "one-way" temperature drops in autumn or early winter in Fairbanks.  (And let the reader beware - what follows is a rather arcane discussion.)  By "one-way" I mean an instance when daily high temperatures drop below a threshold that was not breached earlier in the season, and then the temperature fails to rise back above that threshold at any later date in the same year.  For example, as noted above the coldest day in Fairbanks until Saturday had a high of 37°F, but it's possible that we've seen a "one-way" change to colder, as 37°F may not be reached again until the spring.  This would constitute a "one-way" drop in high temperatures at the 37°F threshold.

Digging through Fairbanks climate data reveals that this kind of thing is fairly common as a result of the high rate of seasonal cooling; about 30% of all years see a "one-way" change to colder high temperatures at some point in the autumn.  The most dramatic was in 1950, when up until September 26 the coldest day had a high of 46°F, but no temperature above 38°F was observed from that date on; that's the largest one-way drop (8°F) that I found.

Here's a chart showing the high temperature thresholds and dates for which these "one-way" cooling events have occurred in Fairbanks.  Unsurprisingly, the earliest was in the absurdly cold September of 1992; the latest was in 1942, when the temperature sank below 22°F at the end of October and did not reach that level again in the same year.  (Note that I haven't included winter after December 31 in this analysis.) 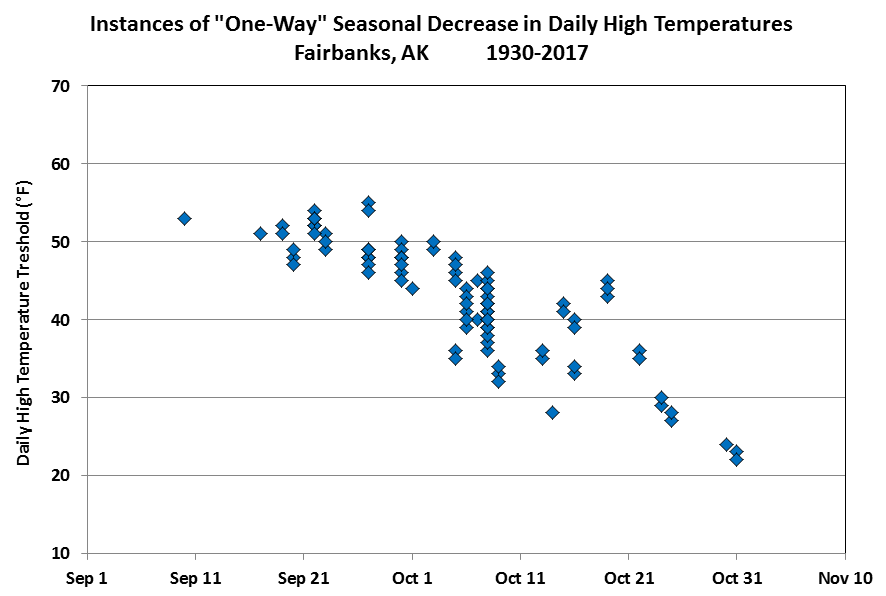 Looking at a number of other sites in Alaska, the frequency of sudden one-way cooling is highest for the most continental sites and lower for more maritime sites, as we would expect.  For example, Anchorage sees such an event in about 20% of years, but Bettles and Northway manage it more often than not at some point in the autumn.

On a related note, it's worth pointing out that Fairbanks has never seen a true one-way temperature drop in which subsequent daily high temperatures never reach the lowest daily low temperatures prior to the drop.  I rather doubt if this has been observed anywhere in the world, as it would require both an extreme rate of normal seasonal cooling and an extreme shift in the weather pattern at the right time.

To finish up, here's a pleasing clear-sky scene from UAF this evening just after sunset.  Officially the snow cover is still only a "trace" - it hasn't made it up to 1 inch yet. 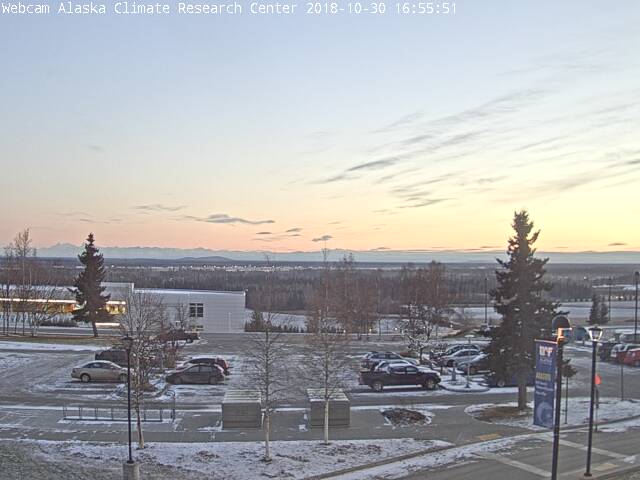 Posted by Richard James at 6:50 PM