No Rain in Yakutat

Hi, Rick T. here with an analysis of one piece of exceptional September we just came through. Specifically, the lack of precipitation on the Gulf of Alaska Coast. One of the most amazing climate statistics to come out of September was from Yakutat, where there was an astonishing 20 consecutive days with no rain at all, not even a sprinkle. Considering that Yakutat averages 24 days in September with some rain and that this streak was several days longer than any previous dry streak this time of year, the question is, just how unusual was 20 straight days with no rain at all? 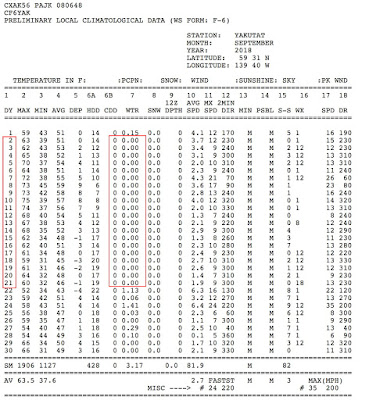 Richard, Brian and I had a long email string on ways to think about analyzing this event. With their help, here's what I came up with.

First, some background to set the stage. 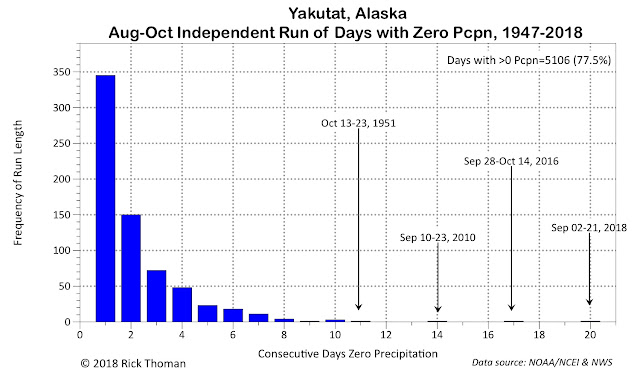 So we see that in the past 72 years there have been only 12 independent streaks that were more than a week long during the early autumn, and only four streaks longer than ten days. We want to get a climatological handle on such unusual events so we can answer questions like: how unusual was this? Could it happen again?

There are a number of ways to potentially answer such questions, but the one I'll provide here involves our old friend, regression. But rather than linear regression (which obviously is not appropriate), I tried mathematical forms that have the potential to represent what we see in the plot above: large and rapid changes as we move from left to right along the x (horizontal) axis. Two commonly used forms for distributions of this shape are exponential and power law. In order to facilitate this analysis I first converted the raw count values into frequencies per year and then plotted the frequency on a log scale, which results in this: 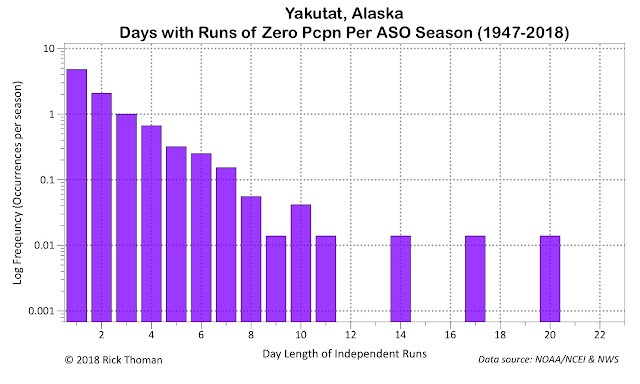 This is the same information as in first figure, just displayed in a different way. But it allows us to immediately to see that that an exponential fit is not likely to work so well. How do we know that? Well, with the y (vertical) axis plotted in log scale, an exponential fit will appear as a straight line. Just eyeballing the top of the bars, you can see that a straight line will fit pretty well for streaks of 11 days or less, but then fails to capture the handful of events longer duration. For that, a power law fit works out better. Now a well established issue with power law fits is that the often only part of a distribution (typically the right tail) is well represented by a power law. How does that work out in this case? I systematically fitted a power law using the observed frequency of all the streak lengths, i.e. 1 day to 25 days (everything about 20 is zero). Then I fitted a power law to streaks of two days or longer, then three days or longer, etc. The "winner" was the fit that had the lowest root mean squared error but still utilized most of the data (there are more sophisticated ways to do this but I have not had the time to implement them, though in this case will lead to the same answer).  It turns out that the best fit was for runs to two or more days and it looks like this: 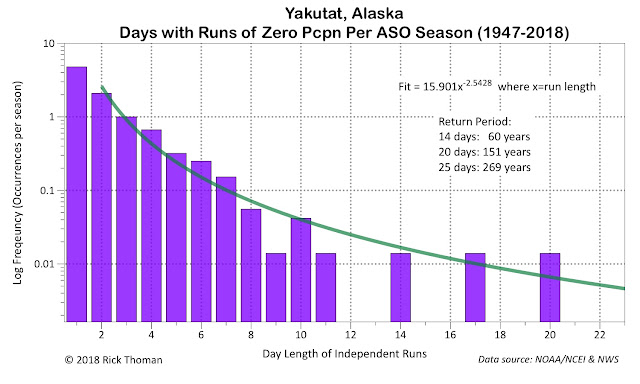 So based on this analysis, the streak of 20 completely dry days in row has only about a 0.7% chance of occurring in any particular August through October season. I've noted the return period as calculated from the fit on the graphic for selected streaks, though I don't really like to do that because it's easy to misinterpret. Why do it? People like to see it, and in principle it is perhaps a more intuitive way to express low likelihood events. But, it is important to remember that a long return period is the inverse of a very small number, and so small changes in the fit result in big changes in the return period. So if I improve this analysis and come up with probability for a 20-day streak as 0.9% in any given year, that's a small change from 0.7%, but the return period would drop by 40 years, to 111.

So from this analysis, the 20 dry days in a row at Yakutat this September was likely a once in a lifetime event, at least if you're of mature years. After all, 0.7% annual chance of occurrence means that, assuming no change and no year-to-year correlation, that there is about a 30% that this will happen at least once in the next 50 years.