There's a lot that could be said about the ongoing persistent and increasingly extreme warmth (relative to normal) across much of Alaska, but time doesn't permit more than a brief update at this point.

To illustrate, Fairbanks has seen 3 days in the past week with a high temperature of 50°F or higher - and to put this into context, the 1981-2010 normal high and low temperature for October 24th are 25°F and 10°F respectively.  Fairbanks doesn't normally see more than a small handful of days above freezing from this point on, so 50°F is quite extreme.

Today was actually the warmest day in Fairbanks since the first week of the month, with a high of 52°F.  This degree of warmth has not occurred so late in the season since the 1930s: it happened in 1934 (the year of the great December chinook) and also in November 1936 and late October 1938.  But similar conditions occurred in 2013, of course, with 51°F on October 28.

The map below shows the culprit for today's balmy conditions: a deep southerly flow aloft, leading to downslope warming to the north of the Alaska Range.  As we would expect, the middle Tanana River valley was warm and windy today owing to the chinook flow; Delta Junction reported wind gusts over 50mph. 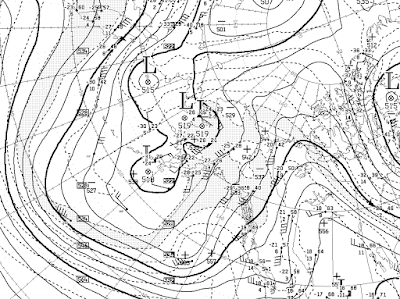 Here's the snowless scene this evening on campus at UAF: a disheartening prospect for winter enthusiasts as well as, more seriously, residents who rely on frozen land and water for important activities. 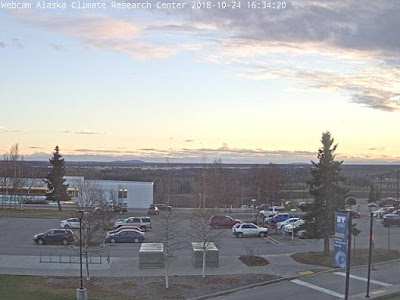 Here's a comparison of this month's daily mean temperatures to the two other years that were outstandingly warm in Fairbanks in the month of October: 2013 and 1938.  No other years have come close to having the same amplitude of warm anomaly for this calendar month.  But neither of those years could hold off winter's freeze until the very end of the month; and so surely it is just a matter of a few days now until the landscape is finally transformed. 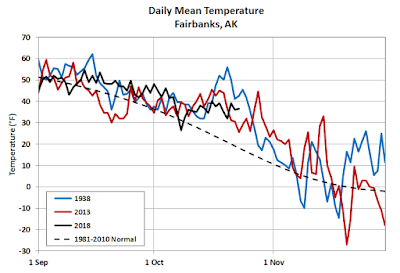