A couple of weeks ago I wrote about the remarkable persistence of unusual warmth in Alaska ever since the sudden and dramatic change in early summer of 2013.  As promised then, I'd like to take a look at the larger climate patterns that have prevailed in the Northern Hemisphere over the same period; this will give us a sense of the broader context for Alaska's experience and perhaps also suggest potential explanations for the change.

First, the map below (click to enlarge) shows the percentage of calendar months since June 2013 in which the average temperature has been above the 1981-2010 normal, according to NCEP/NCAR reanalysis data.  This isn't the most robust data set in the world for long-term temperature trend analysis, but it's OK for a quick look; the results confirm that below-normal temperatures have been rare in the last 5 1/2 years from the Bering Sea to the Gulf of Alaska.  The warm signal also extends across the Arctic Ocean to the Atlantic waters north of Iceland. 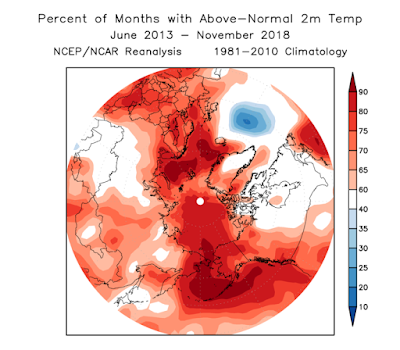 The reanalysis temperatures at 925mb (about 700m above sea-level) show a similar picture, although here the most persistent warmth is evident in the Bering Sea sector.  It is very striking to see such a strong signal at this high latitude (where month-to-month and year-to-year variability are high) and in the free atmosphere aloft (i.e. not immediately tied to ocean conditions). 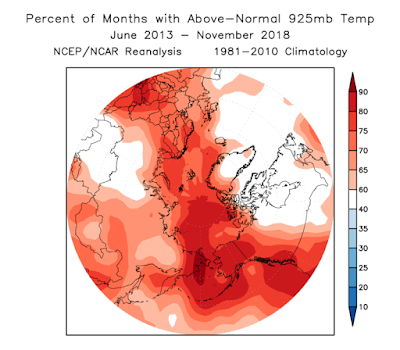 A broader view extending south to 20°N shows that widespread persistent warmth has also occurred over the eastern and northeastern North Pacific; the pattern looks very reminiscent of the positive PDO phase, which is no surprise as the PDO has been positive almost constantly since early 2014, with a strongly positive anomaly at times. 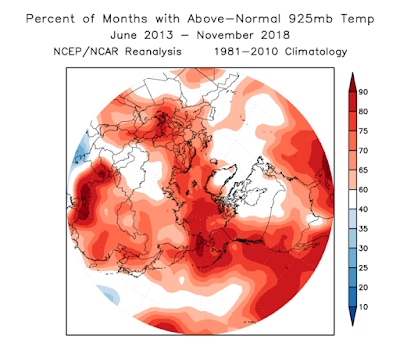 A parallel analysis of sea surface temperatures since June 2013 (see below) shows that unusual warmth has prevailed nearly all the time from the western tropical Pacific to the eastern subtropical North Pacific as well as in the western North Atlantic.  Note two regions of relatively cooler conditions, however: in the North Atlantic south of Greenland, and also in the eastern equatorial Pacific, where ENSO is traditionally expressed (i.e. El Niño and La Niña).  The absence of persistent warmth in the ENSO region implies that we can't immediately pin the Alaska and Arctic warmth on recurring or persistent El Niño conditions in recent years. 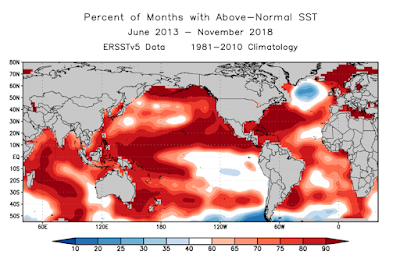 How about the upper-level circulation pattern?  At middle levels of the atmosphere, above-normal pressure has been strongly favored from western North America to the Bering Sea and far eastern Siberia, as illustrated by the frequency of above-normal 500mb height (see below).  In other words, there has been a persistent ridge axis in this area, which is consistent with generally above-normal temperatures.  (This feature was termed the "ridiculously resilient ridge" by climate scientist Daniel Swain in December 2013.) 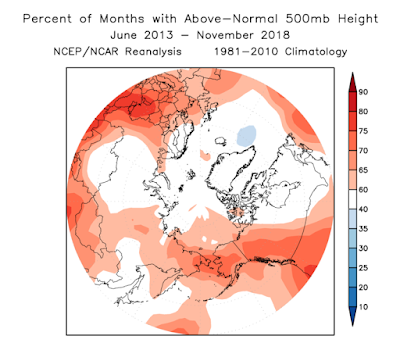 It seems that the prevailing ridge from Chukotka to western Canada has been the dominant circulation anomaly of the Arctic and sub-Arctic region in the past 5 1/2 years.  An expanded view from 20°N to the pole (see below) provides additional perspective; 500mb heights have been very frequently above normal in more southerly latitudes, but the Bering-Alaska ridge is the only sector with a comparable signal at high latitude.  (Note that there is a strong upward trend in 500mb heights worldwide owing to rising temperatures, but the trend is masked at high latitudes in this analysis because the variance is much greater near the pole than in the tropics.) 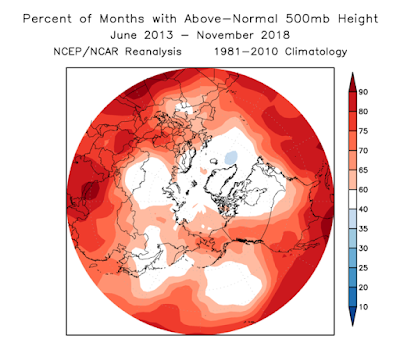 So what can we conclude about Alaska's extraordinary warmth of the past half-decade?  The analysis suggests that there are two primary drivers of the persistent warm anomaly: rapid Arctic-wide warming and the positive PDO phase.  Below are 5-year running means that illustrate the two phenomena: first, the area-average 925mb temperature from 65-90°N, and second, the PDO index.  The third chart below is reproduced from the earlier post, showing Alaska's 5-year average temperature in the red line. 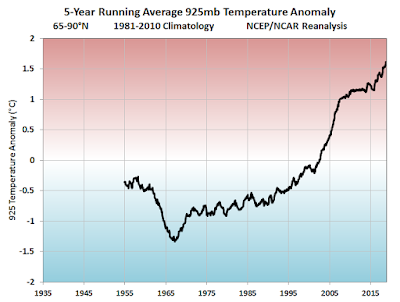 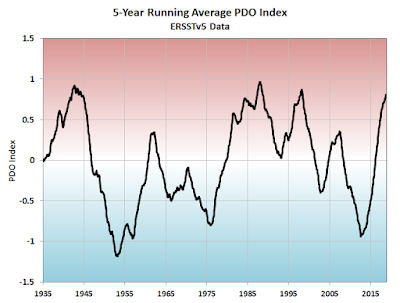 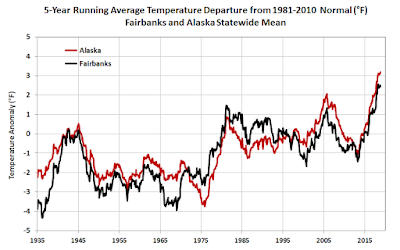 As a simple exercise, we can run a multiple regression for Alaska temperatures with these two predictors: Arctic 925mb temperatures and the PDO index.  Both predictors are highly statistically significant, and after taking a 5-year average the regression fit looks like this: 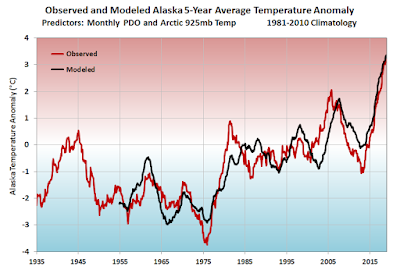 Although rather simplistic, this model manages to capture some of the main features of Alaska's temperature variation, and in particular it does a rather good job with the recent run-up.  One might argue that it's inappropriate to model Alaska temperatures in terms of Arctic temperatures, but we should note that the two temperature data sets come from independent frameworks (925mb reanalysis versus NOAA climate division data); and there's no question that we ought to make the connection between Alaska's climate and the extraordinary Arctic-wide changes of recent decades.

Based on this analysis, it seems reasonable to conclude that Alaska's warmth of recent years is at least partly - and perhaps mostly - a consequence of the positive PDO phase superimposed on a very warm Arctic background environment.  The rapid rise in the 5-year mean temperature seems most closely related to the change in the PDO, but it is interesting to note that the PDO did not turn positive until January 2014, whereas Alaska's warmth emerged more than 6 months earlier.  So as usual there appears to be more to the story, and I'll aim to follow up with a few more comments at a later date.

As a final note, it's interesting to see the large-scale patterns associated with the analogous rise in Alaska temperatures that occurred in the late 1970s (as noted in the earlier post) - see below.  There are some similarities, including the obvious positive PDO pattern and the warm signal from the western equatorial Pacific to the eastern subtropical North Pacific (also in the Indian Ocean), but the amplitude of the high-latitude warm signal was very much less than in recent years - at least according to reanalysis data. 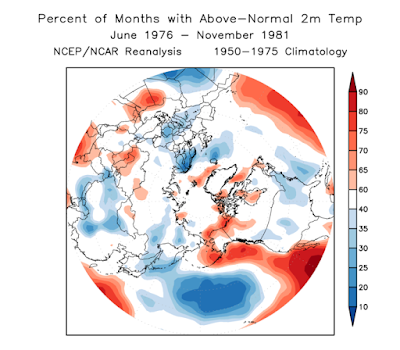 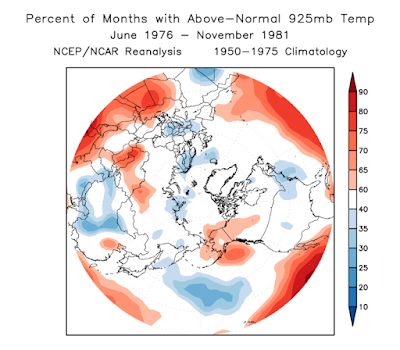 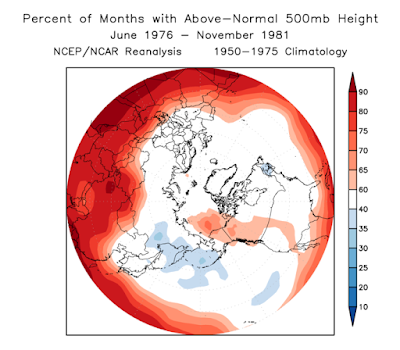 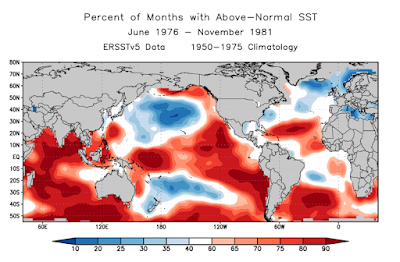