Rick T. here. The lackluster snow season thus far in Fairbanks (less than 24 inches through Dec 28) has got me to thinking about the distribution of snow. In Fairbanks the month with the highest average snowfall is November, but does that mean that November is typically the snowiest month?

In plotting the monthly average snowfall, we see that for the 1981-2010 reference period the average (mean) November snowfall is only very slightly higher than December and is not too much higher than October or January. A quick and easy measure of the statistical significance of these differences is to apply Welsh's t-test to the data. This test tells us what we might have guessed: there is no statistically significant difference in the mean snowfall across these four months. 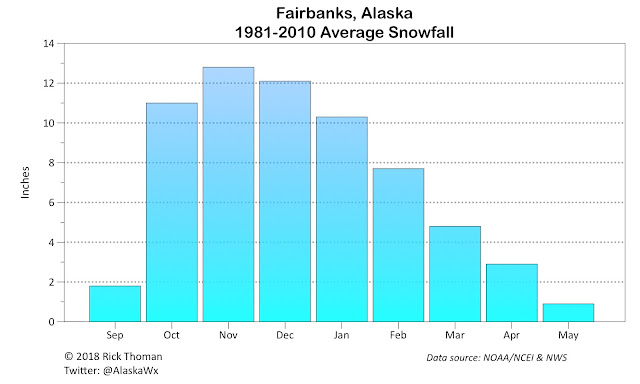 Of course, for something as variable as snowfall in Fairbanks, 30 years is not much of sample, and that is the primary reason the t-test fails to show significantly different means. One way to "get around" this limitation is to construct a series of artificial normals by using bootstrapping. For  this example, I've constructed 1000 30-year normals, using as input only the 1981-2010 observed monthly snowfall totals, assumed there is no trend and that there is no month-to-month correlation: for 1981-2010, none of consecutive months are significantly (95%) correlated. When we do this, we get the following random sample: November has the highest average snowfall 51% of time time, while December has the highest average snowfall almost 37% of the time. 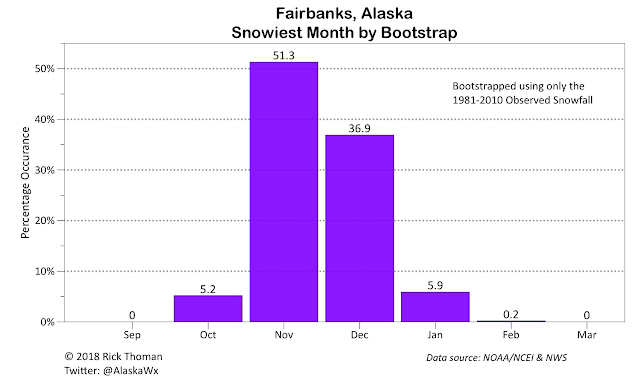 Finally, climbing out of the statistical sandbox, how about we ask "what was the snowiest month" for the winter in full Fairbanks climate record? 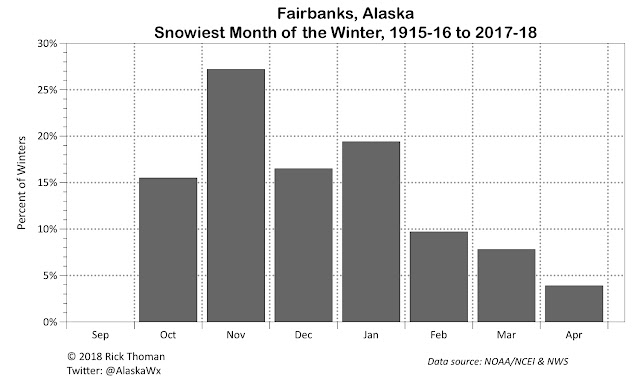