After a couple of cold spells in mid-winter, most of Alaska has returned to unusual warmth over the past month, although it hasn't been as persistently extreme as in early winter.  The graphic below, courtesy of Brian Brettschneider, shows the state-wide index devised by Rick Thoman and described here: 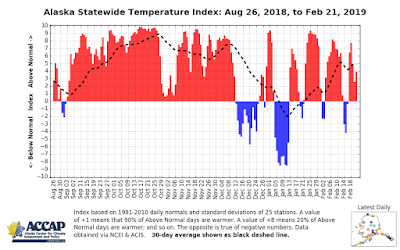 The culprit behind the recent warmth has been an unusual ridge directly to the south of Alaska - see below.

This is quite reminiscent of the persistent ridge that fostered the northeast Pacific's "warm blob" of a few years ago (for example see here for discussion), although the recent anomaly has been centered farther west, allowing cold air to affect southeast Alaska and western states to the south.  Here's the recent temperature departure from normal according to gridded reanalysis data, with western and northern Alaska showing the greatest warm anomaly.

The recent warmth has been particularly persistent in Bethel, where it's now been a month since the daily mean temperature was less than 5°F above normal.

Nome, Kotzebue, and Utqiaġvik have also been exceptionally warm compared to normal of late.

Looking at the interior, the recent warm anomaly diminishes from west to east as expected.

Finally, the warm anomalies at southern (not southeast) sites (e.g. Anchorage, Cold Bay) are not as large in amplitude, but in terms of standard deviations these two sites have seen more significant warmth since October 1st than any of the other 8 sites shown above.  Here's the mean departure from normal in terms of standard deviation of the daily anomalies for October 1 - February 21:

The chart for Juneau is refreshingly different, although it has still been a warm winter on average; the average anomaly since October 1 is +0.27 standard deviations.

Posted by Richard James at 4:56 AM