Hi, Rick T. here with a quick post of the recent warmth in Alaska. One of the most frequent questions I get from Outside media is something along the lines of "Is it warm in Alaska?" After going through the stock "Alaska's a big place with diverse climates" and then giving some impressionistic answer about a hundred times, I thought that it would be worthwhile to try and come up with an objective way of answering those kind of questions. So, a few years ago Brian B. and I developed a real-time index that could help answer this. If your interested the background on how this index is calculated, read on below the chart.

Up through early September Alaska had considerably more days warmer than normal than cooler than normal in 2018, but periodic cool spells kept the run of warm days at a moderate length. Since early September though the index has been persistently quite high: by construction, index values above +3.3 fall into the "significantly above normal" tercile, and that has been the case every day since September 5th. This is an interesting situation in that the cause of the warmth has varied. For much of September and the first days of October, as Richard has noted here, strong high pressure aloft, first over the Bering and then a bit farther east from the Arctic to the Gulf of Alaska dominated. In the past week the pattern has transitioned to a "Gulf of Alaska" storm track pattern. In different parts of the state this weather pattern change has resulted in changing temperature regimes, but on the statewide scale, it's a nice example of how distinctly different patterns can lead to the same outcome: much above normal temperatures. 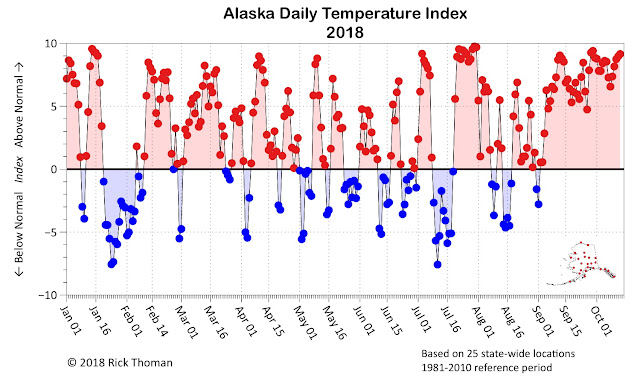 Exactly how the index is derived has gone through several iterations but here's the current version.

1) Find the standardized departure of the daily average temperature for each the 25 sites below (daily departure from normal divided by the standard deviation). This levels the playing field, so to speak, between inland areas, with much higher variability of temperatures, and marine dominated parts of the state, where water dampens the air temperature variability.  These particular sites were chosen to be geographically representative as possible, the observations are all ASOS, so the climate day ends at the same time (midnight), the instrumentation is the same and all have NCEI published 1981-2010 normals (daily average temperature and daily standard deviation). The obvious gaps are the northeast Interior, inland North Slope and the Aleutians.  In these regions there are no ASOS sites with published normals. 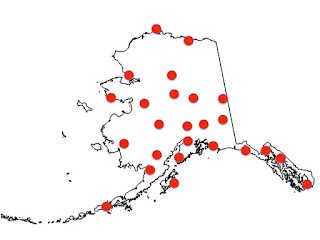