A couple of weeks ago I compared the new 1991-2020 temperature normals to the previous climate period of 1981-2010, and one of the interesting features that stood out was the widespread change to slightly cooler conditions in March.  With the exception of Utqiaġvik, which has of course seen rampant warming, all of the climate sites I looked at showed a cooling trend in March; and March is the only month with a statewide decrease in the 30-year normal temperature.

Here's a map of the March temperature difference according to ERA5: 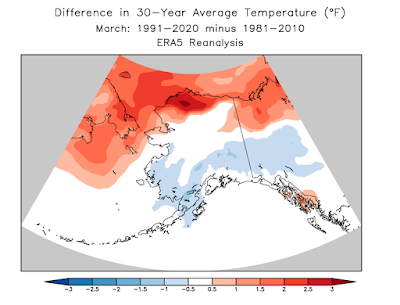 The cooling is quite widespread in the southern half of mainland Alaska, but the magnitude of the temperature difference is small: rarely more than 1°F.  Contrast this with the much larger warming that occurred in the neighboring months of February and April, particularly across western Alaska. 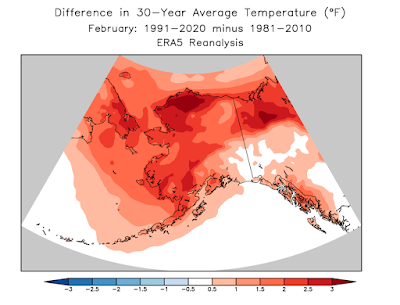 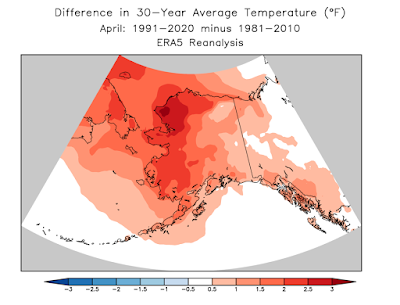 If we look at 3 climate observing sites with noticeable March cooling, we see one key reason for the anomaly: the 1980s were exceptionally warm in March, and that decade has dropped out of the new climate normal period. 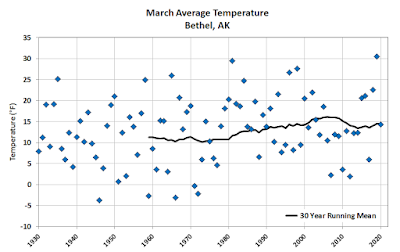 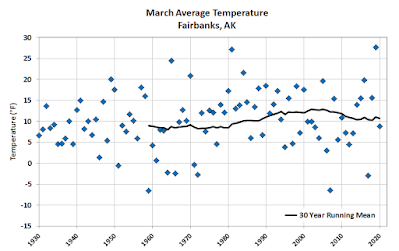 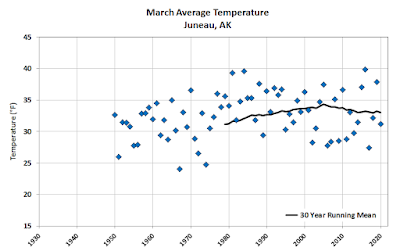 The 1990s were very warm too - notice the complete absence of cold March's in both the 80s and 90s - but then some cold re-emerged after the turn of the century, and Bethel in particular had a spate of cold March's.  Interestingly just a few years ago Bethel's 30-year running average for March was distinctly lower than it is today, so if for example the climate normal period had changed 5 years ago, the new normal would have been more than 2°F colder than the one 10 years before.

Some readers will have recognized already that the PDO phase is a prime candidate to explain the decadal variability we're considering here - which is to be expected, given that it's the Pacific Decadal Oscillation.  Here's a chart of the March PDO index; notice the remarkably persistent positive phase of the 1980s and the return of some significantly negative values around 2008-2013. 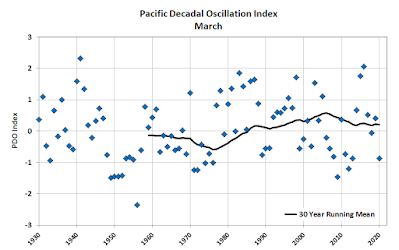 But an obvious question then is - if the PDO is responsible for the March cooling, then why did February and April warm so much?  The PDO tends not to change drastically from month to month, and indeed it was strongly positive in the 1980s in February as well.  However, Bethel's February temperatures (for example) have warmed dramatically in the past two decades compared to the 1980s. 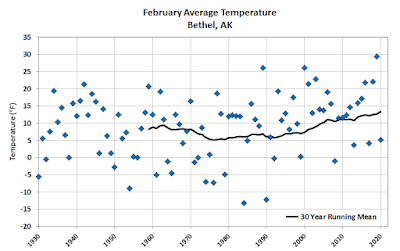 The explanation for this month-to-month contrast is (I believe) that we're dealing with natural variability that has pushed the monthly decadal trends in different directions.  In other words, it just so happens that February and April have recently been warmer than we would have expected based on the long-term trend and the PDO phase; and on the flip side, March has been colder than we would have expected.  If we somehow had another "realization" of recent decades, it could equally well have been the other way around, with relatively subdued warming in February and April and much larger warming in March.

To support this idea that "luck of the draw" with the weather patterns explains the different trends, the maps below show the 2011-2020 average departure from normal for MSLP and 500mb height in March.  This is a relatively cold pattern for southern Alaska, with a ridge axis over the Bering Sea that produces a northerly component to the flow to the east of the ridge. 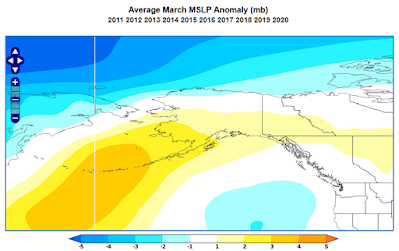 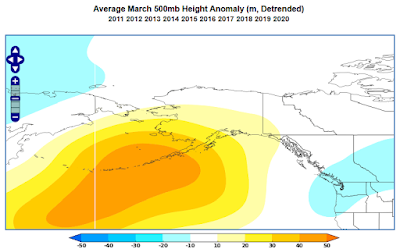 In contrast, February's of the past decade have tended to see a ridge over the Gulf of Alaska and low pressure over the Arctic Ocean, and this combination brings a lot of warm air up from the southwest. 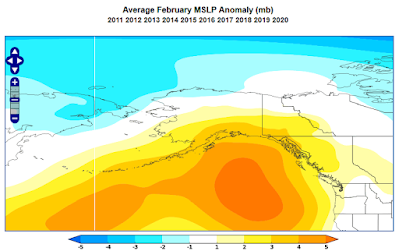 The decadal pattern for April (see below) is quite different, but low pressure near the Aleutians is another typical signal for warmth in southern Alaska (this is an El Niño-like pattern).  Clearly then the monthly weather patterns of the past decade are aligned with the observed differences in trends: cool in March, very warm in February and April. 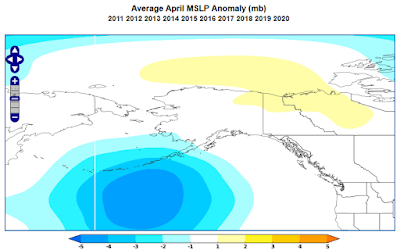 The pattern analysis works at the other end too, in the 1980s: it just so happens that March's from 1981-1990 had the warmest pattern of the 3 months - see below.  Consequently, March in the 1980s tended to be warmer than expected based on the background temperature baseline and the (very positive) PDO phase.  And so with unusual warmth in 1980s and a cool pattern in the past decade, it's no surprise that the 30-year normal has turned a bit cooler for this month. 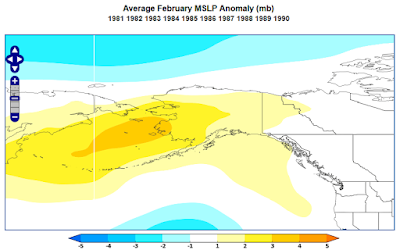 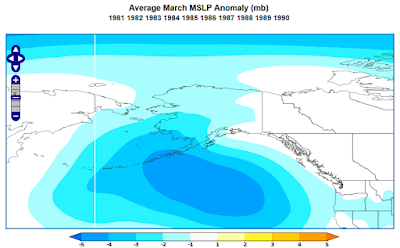 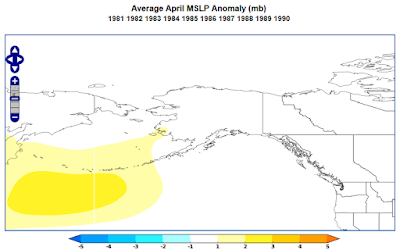