The specific question I was seeking to answer is whether there is any evidence of increasing frequency in extremes of temperature, both warm and cold.  Obviously we expect the data to show a rise in warm extremes relative to a fixed baseline, and intuitively we would expect a decrease in cold extremes too, although there's a considerable amount of discussion around the idea that winter cold extremes could increase in certain regions.  (This is related to the "warm Arctic, cold continents" pattern that Judah Cohen, in particular, describes as a consequence of rapid Arctic warming, i.e. "Arctic amplification".)  So I looked at daily gridded ERA5 data since 1981 to see what I could find.

I won't rehash the details of the mid-latitude analysis - check out the link here if you're interested - but I thought it would be worthwhile to redo the calculations for an Alaska-centric domain.

First, here's an example of what I'm using for a temperature baseline; the figure below (click to enlarge) shows the annual cycle of ERA5 temperature near Fairbanks along with the seasonally-varying range of +/- 2 standard deviations.  The charts I'll show below illustrate historical trends in the frequency of temperatures outside this range; in a Gaussian distribution this would occur slightly less than 5% of the time (2.3% on either side), but of course the temperature distribution isn't quite Gaussian. 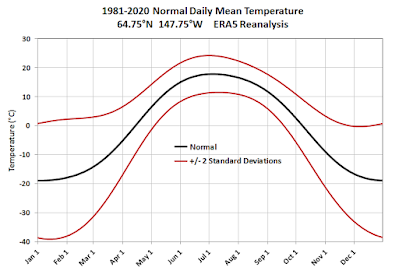 To track the historical frequency of these extremes, I measured the percentage of land area in which +/- 2 standard deviations was exceeded each day from 1981-2020, and then I took the annual average of that percentage for winter (November-March) and summer (June-August).  I also repeated the calculations after removing the linear trend in temperature, while allowing for the fact that the trend varies through the year.

If we start with winter extremes in reference to a fixed baseline, we see the expected rise in warm extremes and decline in cold extremes - see below.  This is for a land area box that encompasses most of Alaska except the Southeast.  2019 stands out in particular for having a lot of winter warmth, and winter cold extremes have been very scarce since 2013.  Note that these are calendar year averages, not grouped by winter, so for example 2019 includes Jan-Mar 2019 and Nov-Dec 2019. 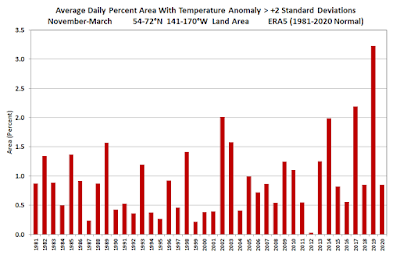 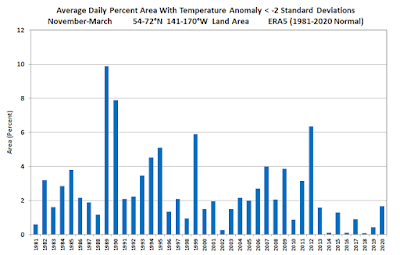 Readers will notice that the values are considerably higher for cold extremes than for warm, and that's just because the winter temperature distribution is skewed towards the cold side; so it's more common to reach -2 SD than +2 SD.  See here for an old post showing maps of temperature skewness by season across Alaska.

Similar trends are observed for summer.  The summer of 2004 really stands out for exceptional heat, and 2013 and 2019 were also very warm.  Cold extremes have again been few and far between in recent years. 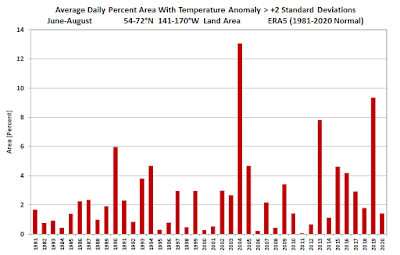 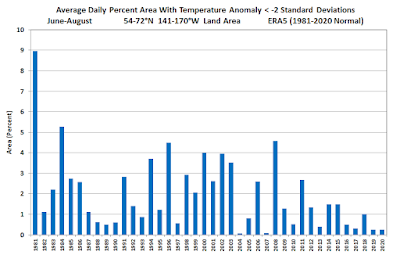 Now let's examine the data after removing the 1981-2020 linear trend; the overall trends for summer and winter are illustrated here, for the same land area box: 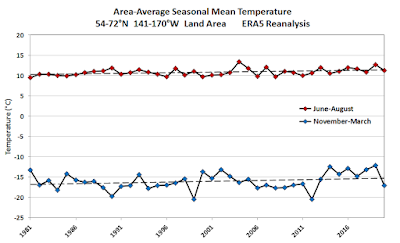 The winter warmth in recent years has considerably exceeded the trend (indeed the trend was actually down for the first 30 years of this period), so it's no surprise to see that cold extremes have dramatically dropped off in recent winters even after detrending: What's more surprising is that recent years have not seen excessive warm extremes after detrending - see below.  If the temperature variability were unchanged, then we would expect to see an abundance of warm extremes from 2014-2019, because winter temperatures were generally above trend in those years. 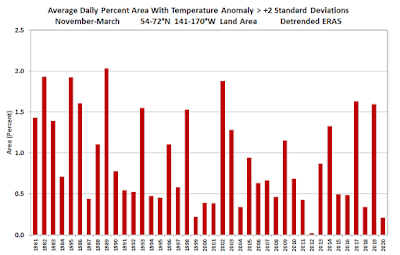 My tentative conclusion from this is that the recent warm winters did not produce warm extremes of the magnitude that would have been expected if the temperature variance were unchanged.  Yes, it was extremely warm in the mean; but the upper end of the temperature distribution did not rise as much as we might have expected.  But perhaps this is reasonable: all else being equal, a cold climate has more variable temperatures than a warm climate, so variance probably should diminish as the baseline warms.

Finally, for completeness, below are the detrended extremes for summer.  In this case it's interesting to see the lack of cold extremes in the last 5 years, even though summer average temperatures have more or less tracked with the trend.  Again, decreasing variance may be at work, even during the relatively less volatile summer season; and this may well be related to the high humidity that seems to have been a feature of recent summers. 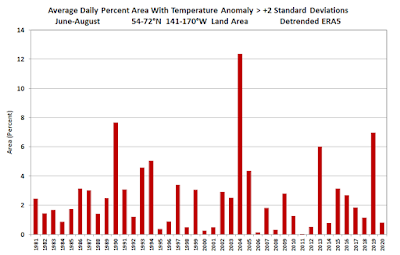 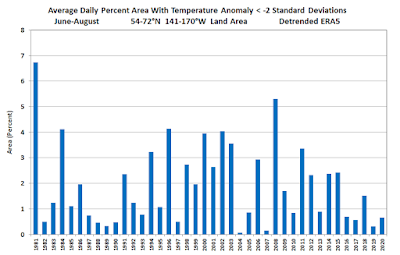 Posted by Richard James at 2:58 PM