Unprecedented cold for the time of year will expand across Alaska in the next 48 hours; the forecast remains on track.  Here is today's GEFS ensemble update for 850mb temperatures in Fairbanks: 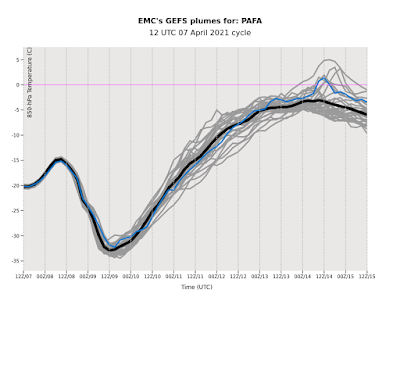 The cold has already reached the North Slope, with coastal temperatures around -15°F to -20°F on a westerly breeze.  Utqiaġvik dropped to -19°F this morning and remained at -18°F all day; it was the coldest afternoon so late in the season there since 1991.

Confirming the extreme nature of the air mass, the 4pm balloon sounding from Utqiaġvik measured an 850mb temperature of -34.5°C.  This is the coldest on record for April, and colder than anything previously measured outside of December-March. 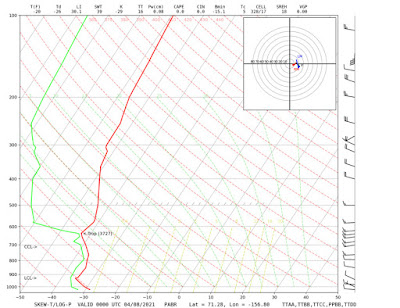 What's responsible for this?  It's an intensely cold Arctic low pressure system that has dropped down from the central Arctic Ocean in the past few days and is now located almost directly above Utqiaġvik.  Here's an animation of 500mb heights over the past 3 days and the next 3 days:

As for explaining why the Arctic low is dropping down so dramatically, I think a key factor is the strong ridge that has prevailed since Monday over the Aleutians.  Here's a static image from yesterday morning, when the ridge was at its peak: 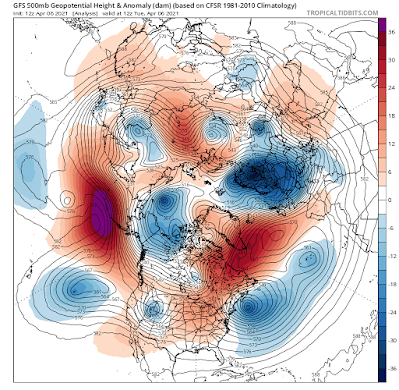 As the jet stream rounds the peak of this ridge over the Bering Sea, it naturally then drops south into a trough on the east side over the Gulf of Alaska.  The jet then spins up a strong surface cyclone in the Gulf of Alaska tonight and tomorrow, intensifying the trough and dragging the Arctic low farther south.  Here's a 250mb wind map, again from yesterday morning. 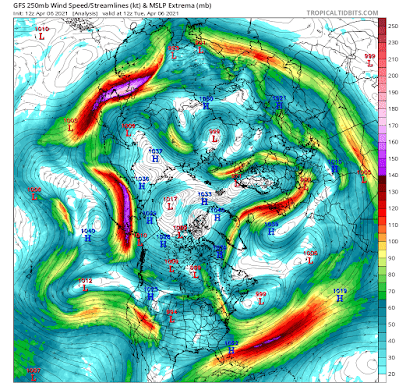 As it happens, the ridge to the south of the Aleutians was a very prominent aspect of last month's North Pacific pattern, and there's little doubt it was favored and reinforced by very unusual warmth in the North Pacific waters to the east of Japan.  So I would argue that this extreme cold outbreak is actually directly linked to the remarkable and persistent North Pacific warmth. 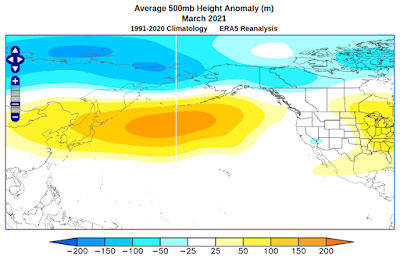 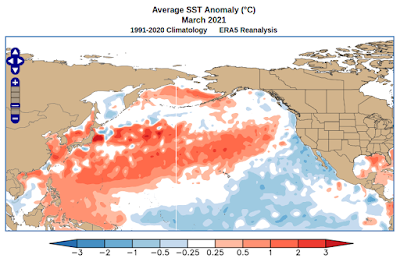 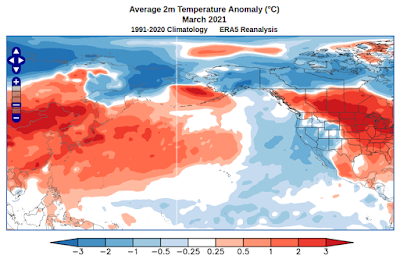