Winter is putting on a remarkable final act in Fairbanks-land, with extraordinarily heavy snowfall in the past several days - especially for the time of year - and very unusual cold.

First, the cold: the high of only 11°F on the first of the month in Fairbanks was the lowest daily maximum temperature in April since the remarkable events of 2013.  Today has seen similar temperatures, but it felt even colder with a very stiff breeze.  And still colder conditions are on the way; the National Weather Service is going for just 4°F on Friday, which would be the coldest daytime high on record for so late in the season (1930-present).

As for snow, Fairbanks is up to 16.7" in the first 4 days of the month, which already makes this the snowiest April since 1948.  The two-day total of 13.2" marks the first time on record that more than a foot has fallen in a two-day period in April.

Late winter and spring are typically the driest time of year in Fairbanks, so it's really noteworthy that 1.2" of liquid equivalent precipitation fell in the two-day period.  There have only been 4 other events in 90 years when more than 1" fell in two days between late January and late May, i.e. during a period spanning one-third of the year.  Three of these involved a rare snow onslaught like the current event, bucking the seasonal normal:

It's also worth noting that this event produced the most two-day precipitation to fall as snow since the March 1991 event; so it's been 30 years since a snowstorm of this character occurred in Fairbanks - at any time of year.  (Late September 2015 saw more than a foot of heavy wet snow, but about half the total precipitation fell as rain.)

Here's the webcam view from the University of Fairbanks this afternoon: not very spring-like. 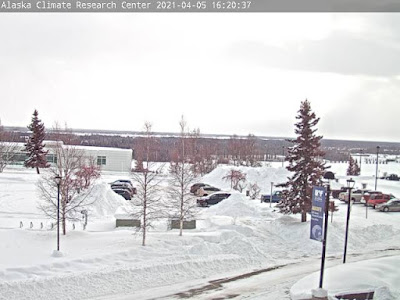