A couple of quick notes this evening to mark the seasonal transitions of meltout and breakup in the middle Tanana River valley: the Fairbanks snowpack melted out on Tuesday, and the tripod went out at Nenana today.

It's typical for meltout to be about a week ahead of breakup at Nenana, but a 3-day difference isn't too unusual.  There have been a handful of years when the ice went first (most recently 2018: May 1st versus May 4th).

The unusual aspect of this year's events is how quickly it all happened, after the severe cold around the 10th of the month, with 37" of snow on the ground on April 11.  This year's meltout is the fastest on record that snow depth of 30-36" has disappeared in Fairbanks - see the chart below. Remarkably, this is very similar to last year, which still holds the record for losing snowpack of around 27". 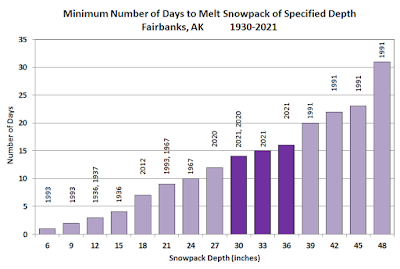 An interesting factoid - which is probably related - is that today is one of the coldest breakup days on record, with a high so far of only 38°F in Fairbanks.  Nenana breakup has never been observed with a high under 40°F, so this might be a new record.  It seems very likely that the ease with which the ice moved today is related to the huge meltout flows that are putting a lot of pressure on the ice; without the big snow melt, the ice probably would have held on a few more days.

[Update: the high was 39°F - and a trace of new snow was observed.  Not your typical breakup weather.]