I was too busy to post on this at the time, but last Wednesday a very late snowfall occurred at Bettles, on the south side of the Brooks Range.  Rain turned to snow in the early morning hours, and even though the temperature remained above freezing, 2.4" accumulated by late morning before melting later in the day.  This is actually the largest snow event on record for so late in the season, with data back to 1951 (and some data back to 1944).  The only other snowfalls of 1.5" or more after May 15 were May 19-20, 1996 (1.6") and May 22, 1956 (2.0").

Say it isn't snow?! Moderate to heavy snow fell at Bettles this morning. Around 1.5 inches fell by 10 AM, however, it is melting due to temperatures above freezing. We are expecting this system to move northeast and continue to bring snow, especially for higher elevations. #AKwx pic.twitter.com/QHTV2OsTUJ

Here's a visual depiction of all 1" or greater calendar-day snowfalls in May through September since 1951, for both Bettles and Fairbanks.  Click to enlarge: 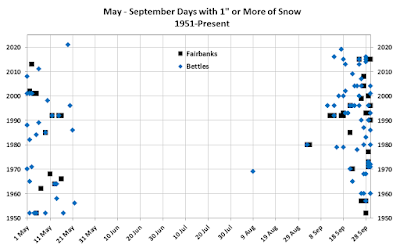 A couple of comments are in order.  First, that August 9 snowfall in Bettles is real: 2.6" fell in the middle of the day on August 9, 1969, and 2" was still on the ground the next morning.  The next day 3" was reported far to the southeast in Northway, so obviously it was an extraordinary cold snap for the time of year.

But the most striking feature of the chart is the increase in mid-September snows at Bettles in recent decades.  The change is remarkable: in the 40 years from 1951-1990, only 2 years saw a 1" snowfall on or before September 20, but in the latest 30-year climate "normal" there are 9 such years.  Digging into the reasons for this would make for an interesting study.