I mentioned in the last post that July retains the top spot for monthly mean precipitation in Fairbanks, according to the new 1991-2020 climate normals, and that historically this was not true for most of Fairbanks' modern climate history; August used to be wetter than July.  A July rainfall peak also differs from most of the state, as August is considerably wetter than July in all but the eastern interior and the North Slope.

To look at the shifting climate normal in more detail, here's a chart showing the overlapping 30-year normals since 1931-1960 for the warm season months.  A spate of wet July's from 2001-2010 brought a significant increase to the July average in the 1981-2010 normal, but the other months were largely unchanged until more recent years.  However, the 1991-2020 normal is wetter in each of June through September (but interestingly there's a slight downward trend in May). 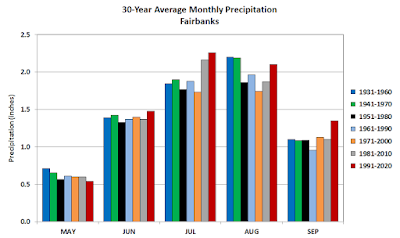 Here's a time series view of the June-September totals (blue columns) and the fraction that is attributable to July (gray columns). 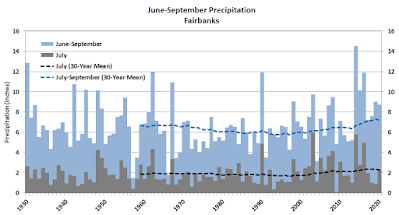 The change in July is largely attributable to a handful of very wet months, but the consistency of the high seasonal totals since 2014 is quite remarkable.  Here are a few blog posts from last summer about this:

Another interesting aspect of the Fairbanks warm season climate history is that the early decades were also relatively wet, but the excess was seen mostly in August back then; August used to be distinctly wetter than July.  But this change isn't just about a shift in rainfall timing from one month to another; it also reflects a major change in the character of summer rain events.

Consider the chart below, showing the total precipitation in categories of daily totals, i.e. how much of the long-term normal is attributable to light versus heavy amounts.  The first two decades in this analysis (1931-1950) saw a higher fraction of precipitation from relatively light daily amounts, but over time there's been an upward trend in the contribution of high daily amounts. 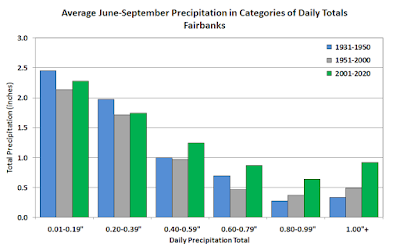 The change in the distribution of daily amounts is connected to the July-August shift, because July rainfall is typically much more convective (brief, heavier events), whereas August rains tend to be stratiform in nature (lighter, more extended rains).  In recent years Fairbanks has seen a decreased frequency of August rains, but very heavy rains in July - while still quite rare - have begun to occur frequently enough to make a significant difference in the long-term rainfall totals.

For more on this topic, see this post from a few years ago:

Posted by Richard James at 4:59 AM