The weather of the past week in mainland Alaska is a tale of a remarkable ridge of high pressure that intensified and migrated northward across the west coast and up into the Arctic.  At its onset the northward surge of warm air brought very warm conditions to southern and western Alaska on Tuesday, including 71°F in Anchorage, 78°F in Talkeetna, 75°F in Bethel (tied for 2nd earliest 75°F on record), and 80°F at Sleetmute on the Kuskokwim River.  The high-quality CRN site at Port Alsworth on Lake Clark reached 77°F, after a morning low temperature of 28°F; that's the largest daily temperature range outside of winter at that site since the sudden heat wave of late May 2013.

The heat extended farther north too: Nome reached 71°F on Tuesday, and as in Bethel, this was tied for second earliest on record for such warmth (72°F occurred in May 22, 2002).

Below are 500mb height charts from 3am on Monday, Tuesday, and Wednesday mornings: the ridge ballooned up into the Arctic by Wednesday, with a remarkable peak geopotential height of 5700m.  This is the highest on record for the month of May over the Pacific side of the Arctic Ocean (based on ERA5 data since 1950). 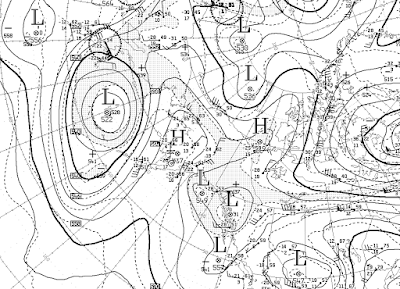 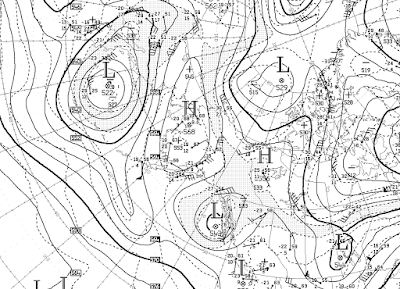 With a strong anticyclonic circulation taking shape around the ridge as it became cut off from the mid-latitude jet stream, the flow turned to the north over central and eastern Alaska - and the temperature started to drop.  Arctic air began to intrude, and on Friday an upper-level low pressure system dropped in from the northeast, forced down to the south and west by the flow around the ridge.  Here are Thursday, Friday, and Saturday mornings: 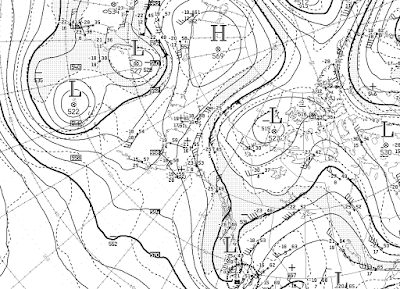 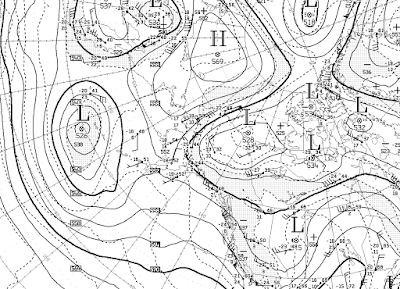 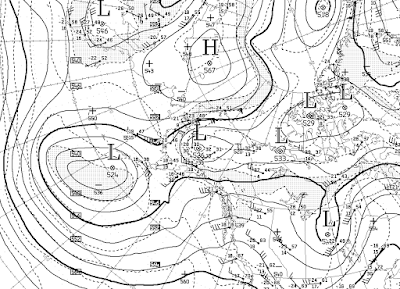 And so by Friday morning wintry conditions had returned to northeastern Alaska: Toolik Lake dropped to 17°F with fresh snow.  Freezes occurred widely in the eastern interior; and to cap it all off, snow fell yesterday in parts of the eastern interior and at low elevations in the Alaska Range.  Eagle reported an inch of snow - the latest on record for the town, according to Rick Thoman.  Here are low temperatures ending at 8am Saturday morning: click to enlarge. 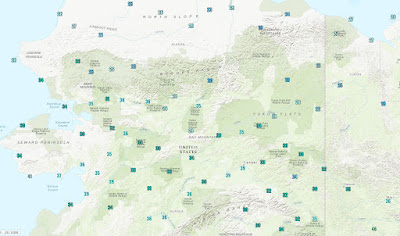 The sequence of events is a bit reminiscent of what happened back in April, when a record-breaking cold air mass dropped south in response to a strong ridge to the west (but over the Aleutians in that case).  The ebb and flow of these circulation features has been quite striking for some months now, with notable cold outbreaks causing problems in the middle latitudes (Texas in February, spring freezes in Europe and the eastern US); but I haven't seen any evidence of an increase in volatility or extremes on a hemispheric scale.
Here's a simple animation of the 500mb heights at 12-hourly intervals from last Sunday afternoon through yesterday afternoon.  A fascinating sequence for meteorologists!

Posted by Richard James at 5:00 AM