The recent weather pattern, with a persistent trough over far eastern Russia and the Bering Sea, has allowed winter to make an appearance over western Alaska, while central and eastern areas have been much warmer.  The contrast reached an extreme last weekend, as deep southerly flow and a major chinook brought excessive warmth to the eastern interior.
Remarkably, it has been almost two weeks since Fairbanks had a daily mean temperature lower than Nome, and this is very unusual indeed for the time of year.  Typically the interior cools off much more quickly in late autumn than the west coast, owing to the strong maritime influence in the west and the lack of ice in the Bering Sea.  Because of this, early November is the time of year when Nome is most likely to be warmer than Fairbanks, i.e. the opposite of what's happening this year. 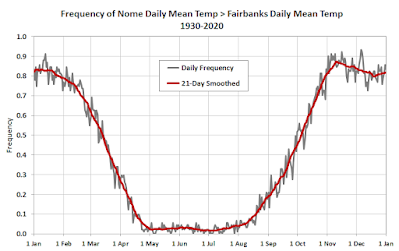 In the first half of November, Nome is warmer than Fairbanks on 87% of all days, according to the 1930-2020 history, and in recent years this percentage has risen still higher, as the Bering Sea has been so warm.  For instance, in the past decade only 12 days between Nov 1 and Nov 15 have been as cold or colder in Nome than Fairbanks, i.e. 8% of all days in that window; and yet we are currently standing at 12 such days in a row.  Here's a chart of daily mean temperatures, and their 1981-2010 normals, in the two locations since September 1. 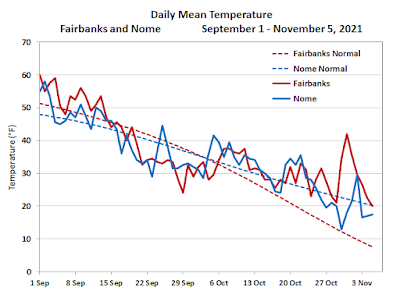 The freeze-up situation reflects the unusual contrast: there has been lots of ice on the Yukon out west for days now, but the Tanana River still shows mostly open water.  Here's a webcam photo of the Yukon at Grayling from more than a week ago, versus the Nenana webcam today: 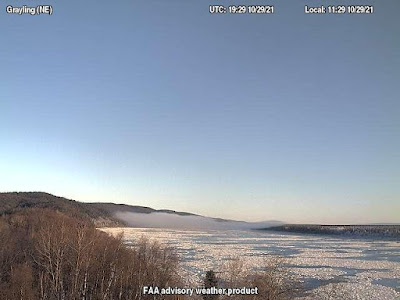 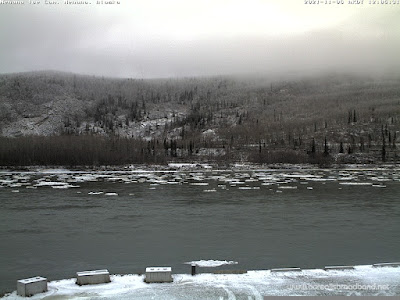 The notorious cold spot of Chicken has only dropped to -4°F so far this season, a far cry from last year, when -40° was reached more than once in early November.  Looking at a map of the lowest temperatures since October 1 (click to enlarge images below) shows many locations yet to see 0°F or even single digits Fahrenheit from Nenana to Fairbanks and in the Yukon-Tanana uplands.

Here are a few 500mb maps to illustrate the circulation pattern, including the remarkable chinook last weekend.  Note the persistent trough over far eastern Russia: an anchor point for the cold air mass that has been entrenched over western Alaska.
3am AKST Oct 26: 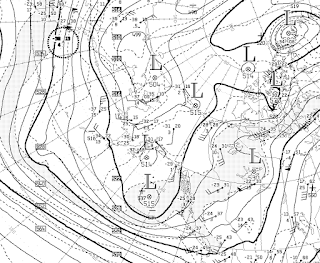 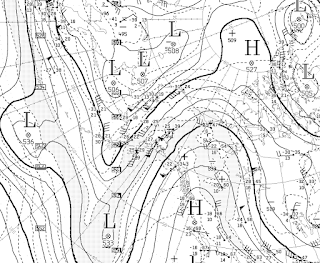 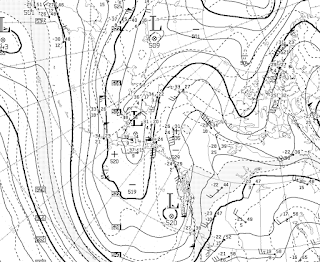