First, a brief follow-up on the last post: we ended up with 15 consecutive days without Nome being warmer than Fairbanks, which is quite amazing for the time of year.  Based on 90 years of climate data, the record for a sequence of such days ending in November is only 7 days, which occurred in 1956.  There were 10 such days leading up to Christmas in 1959.

Something like normalcy has now returned for Fairbanks, as much colder air arrived aloft over the interior, allowing surface temperatures to drop to more seasonable levels.  It's still cold in Nome, though - and notably cold around the northwestern interior: quite a number of locations dropped into the -20s there this morning.

The Tanana River at Nenana looks to be mostly frozen over - at last. 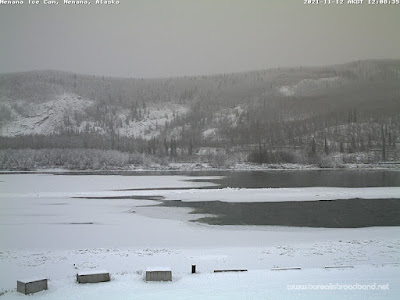 Looking back at October, here are the climate division temperature and precipitation ranks, courtesy of NOAA/NCEI: 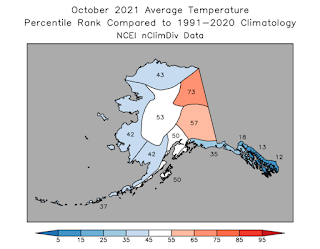 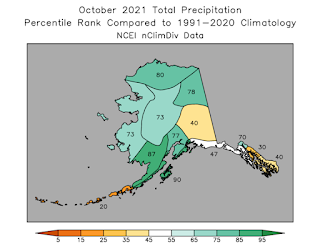 Below is Rick Thoman's temperature anomaly map for the month.  Notice that the cold departures in the southeast, though small in absolute terms, amounted to one of the colder Octobers in the last 30 years (compare with the map above). 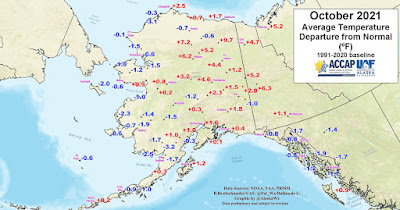 The large warm anomalies in the northern interior are interesting, and it's good to see that this quite localized feature is reflected in the ERA5 data: 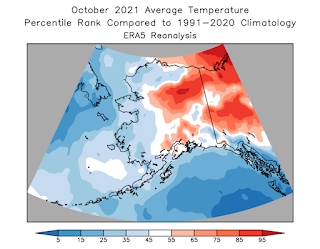 Enhanced cloud cover seems to have had something to do with this warm anomaly, and this in turn was related to unusual low pressure from Alaska to northwestern Canada, and an extensive trough from eastern Russia to the northeastern Pacific: see below.  It was a very unusual circulation pattern with really exceptional, record-breaking warmth over much of central and eastern Canada; the northern interior warmth in Alaska was right on the western edge of the continental-scale anomaly. 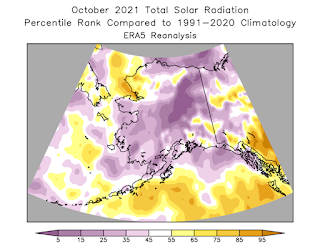 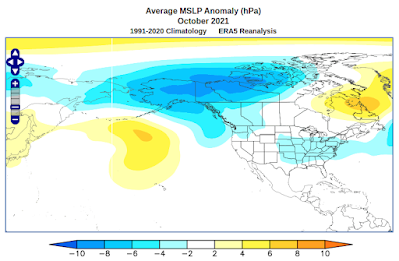 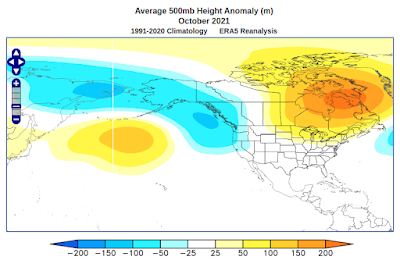 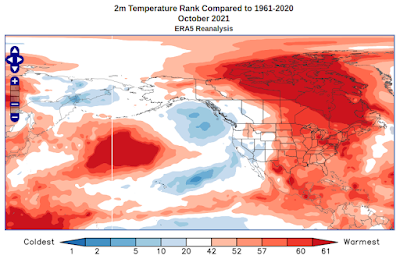 Here are the ERA5 maps for some other variables: 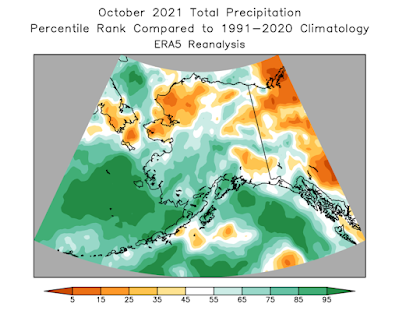 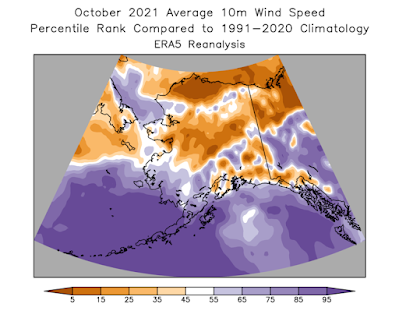 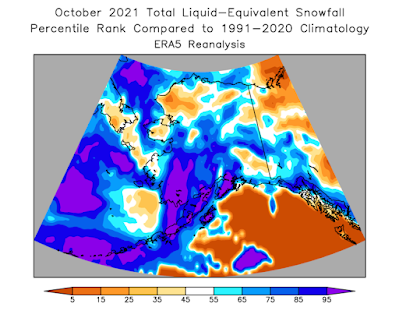 Finally, given that we're talking about October, it's worth checking in on Utqiaġvik, where the loss of sea ice has so profoundly changed the temperature climate for the month.  This October was a little cooler than in the last 5 years, but still way above the norm from earlier decades.

Utqiaġvik October average temp of 23.7F (-4.6C) makes this a typical October for the 21st century. For the 20th century (post 1919), this would have been 4th warmest. Dramatic change the result of #seaice loss. #akwx #Arctic @Climatologist49 @ajatnuvuk @CinderBDT907 @bertaglenn pic.twitter.com/dM0e3gbLcn

Posted by Richard James at 1:35 PM