With very unusual cold persisting in southwestern Alaska, and even colder conditions arriving in the next few days, some spots with longstanding climate histories appear likely to break their records for coldest November.

For example, assuming the NWS forecast is correct for the rest of the month, King Salmon will end up with a monthly mean temperature of about +4°F, compared to the 1963 record of +8.4°F (data since 1942).  With such a large margin of difference, it seems very unlikely that the record won't be broken - as noted by Rick Thoman.  Temperatures in recent days have been colder than anything seen last winter, and are not too far off the coldest that is typically seen throughout an average winter at this location. 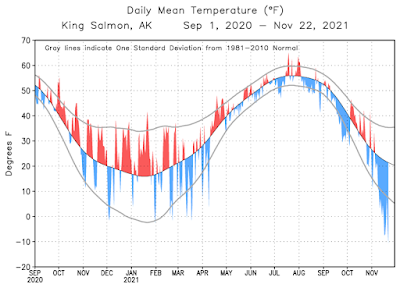 Looking at data from Bethel, which has a period of record back to 1923, it looks like November 1939 was colder than November 1963 in the region, but the NWS forecast suggests Bethel still has a chance of breaking the record.  Currently it seems the monthly average may end near 0°F, with the 1939 record standing at +0.1°F.  This is quite a bit colder than the average January in Bethel (only 5 Januarys have averaged below 0°F since 1976).

Anchorage currently looks unlikely to break its monthly record of 9.4°F, set in 1955.

If records are broken at several sites, this would be the first winter month since January 2012 with widespread monthly cold records at longstanding climate sites in Alaska.  March 2017 saw record-breaking cold in Haines, and April 2013 was record cold in the interior, but other than that warmth has been the oft-repeated theme.