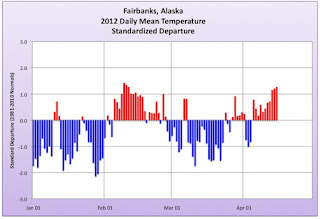 The average temp the first half of April in Fairbanks was 30.1F, which is 3.0F above normal. Left is the updated plot of standardized daily mean temp departures for 2012, with the current warmth falling right in with yo-yo pattern we had all winter.

That's a tall order, but with the valley snowpack now going fast and the CFS and CPC weeks 1 and 2 guidance showing no end to the warmth, it looks to be within reach. Of course, six of the ten warmest Aprils of record have occurred since 1990.
Posted by Rick at 8:14 AM