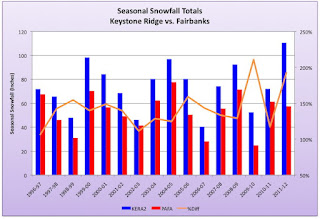 The snow season is not necessarily done with yet, but with mild weather here and the snow melted out in town, here is a comparison of total seasonal snowfall between the Fairbanks Airport and here on Keystone Ridge. The percentage of snowfall on the ridge compared to the airport is plotted by the orange line. As Keystone Ridge is more than 1000 feet higher elevation than the airport, it's no surprise that every year there is more snow on the ridge than the airport, and the 16 season average is 39 percent more on the ridge than the Airport. It is somewhat surprising that in some seasons the difference is not very great: in three of sixteen winters the difference is less than 20 percent. This reflects the fact that the transition season from rain to snow in the autumn is often abrupt, and that spring is usually quite dry, so contributes little to the seasonal total. The winters with the biggest percentage difference, this past winter and 2009-10, both resulted from Keystone Ridge receiving much more snow in one or more events when winds aloft were west to southwest, a favored direction for copious precipitation.
Posted by Rick at 10:42 AM