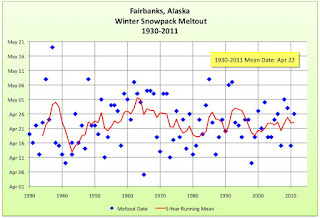 With record heat in progress, and the snow depth down to 7 inches and going fast, here's a look at the winter snowpack meltout date since 1930. For this exercise, meltout date is the latest date with 1 inch or more snow on the ground which was preceded by a week of days with an inch or more of snow on the ground. This last bit is there to exclude the few years like, say, 2001, when the winter snowpack was gone by April 22nd, but there were two consecutive days with accumlating snow in early May that resulted in an inch on the ground on the morning of May 5th. For most of the period of record, this is the depth of snow on the ground early in the morning. The plot on the right shows this date for each year through 2011; the black line is the 5-year running mean. As you can see, since 1972 the winter snowpack has lasted into May only four times, though since the early 1970s there is no trend at all in meltout dates.

Meltout date this year will be April 17-19, so just a touch earlier than the long term average.
Posted by Rick at 11:27 AM