What does this mean?  It means we hereby enter the dark third of the year in the northern hemisphere; and of course this fact is more inescapable the farther north you go.  We can illustrate the lack of solar energy across Alaska in winter by calculating the theoretical solar insolation under clear skies.  From this theoretical standpoint, the total solar energy received in Fairbanks over the next 4 months is less than is received in 6 days in the height of summer.  In Bettles the dark third of the year receives less radiation than in 4 days in summer.  However, in Anchorage the winter sun provides the equivalent of about 10 days in summer.

Here's the view at close to solar noon yesterday from the Alaska Climate Research Center webcam on UAF West Ridge.  The weakness of the sun is illustrated by the fact that some snow remains on the ground despite most days getting above freezing in the past two weeks; the official snow depth in Fairbanks has been at 1 inch for 10 days now. 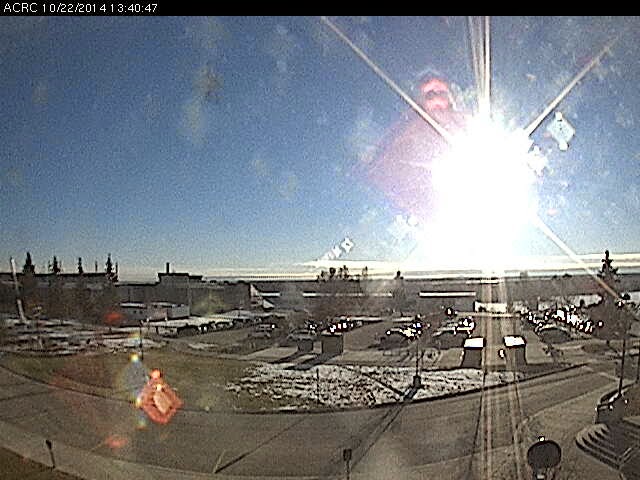 On another note, Barrow has had a chilly and very windy time of it in the past several days, with a very strong pressure gradient importing cold Arctic air from the northeast.  Here's the surface analysis from Monday afternoon when winds were sustained at about 40 mph for a time.