The intense high-pressure ridge over northwestern North America has brought extremely unusual warmth to interior and northern Alaska in recent days.  In Kotzebue, which has been much warmer than normal for most of 2014, the temperature hasn't been below freezing since Sunday - this will probably be the fourth consecutive day with a minimum temperature at or above 32 °F.

In the context of the historical data, this is remarkable.  It's unusual to see any day in November (or December) with a minimum temperature of 32° or above; there have only been 15 cases since 1930 prior to this year, and all but four of these were before November 10.  The only remotely comparable event was in 2003, when the first 5 days of the month remained at or above 32 °F.

Extreme warmth has also been seen at McGrath, where the temperature reached 50 °F yesterday; this breaks the all-time record for November.  Previously the latest date in the year that 50 °F was observed was October 22, 1980 - more than 3 weeks earlier in the year.  Judging from the FAA webcam image this afternoon, there is little or no snow cover left at McGrath. 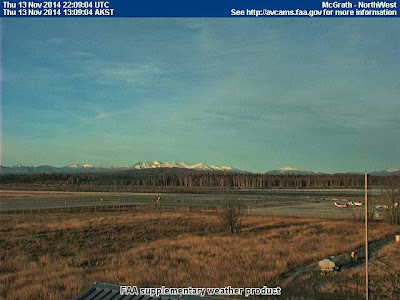 The upper-level high pressure system is the dominant feature in this morning's 500 mb analysis, see below.  The 500 mb height and temperature at Fairbanks were measured at 5670 m and -16.5 °C, both of which are above the normal values for the peak of summer.  Remarkably, the 1000-500 mb thickness was 5502 m, which is the same as the normal value in late June or mid-August; so it is no exaggeration to say that the average column temperature in the lower half of the atmosphere is as warm as in summer. 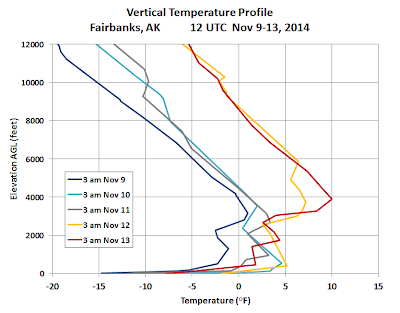 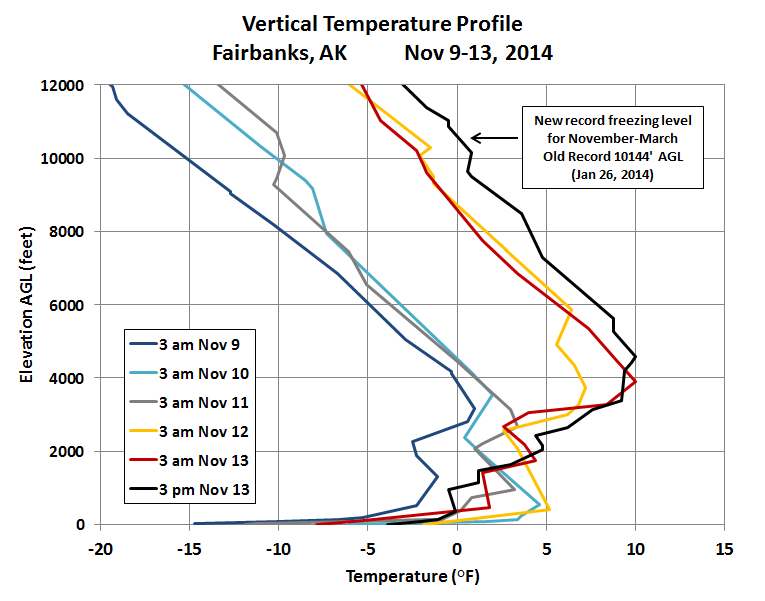