Snowfall on Thursday night and Friday finally brought the snowpack in Fairbanks to above 12 inches in depth, with 5.2" of accumulation measured at the airport.  In the wake of the snowfall, the temperature dropped sharply and reached -20 °F at the airport, the coldest observed so far this mild winter.

It's a common occurrence to see temperatures drop rapidly when clouds dissipate above fresh snow cover, and I got to wondering if this "post-snow" temperature drop could be quantified.  For example, in the latest event the temperature dropped from 22° to -20°, a drop of 42 °F, and after the early December snowfall the temperature dropped 38 °F from 25° to -13 °F.  Are these numbers typical?  To look at this, I searched the winter months (November-March) since 1930 for snowfall events of 4 inches or greater, with two-day totals included.  I then removed overlapping events and obtained the largest temperature drop within two days after snow ended in each case (243 cases in 85 years).  A histogram of the results is shown below. 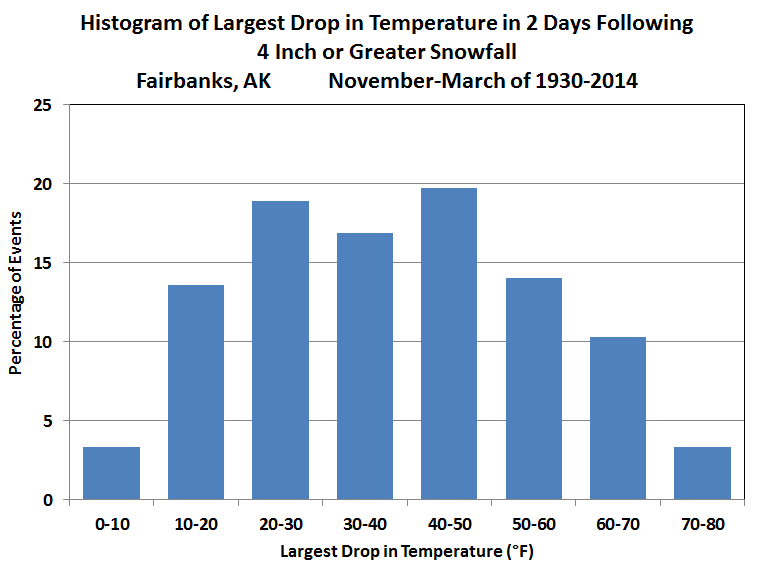 The historical data reveal that a drop of 40 °F in one or two days is very typical, with the long-term median being 37 °F.  It's not at all surprising to see that large temperature drops are quite common, because the thick cloud cover and warm advection associated with these relatively "heavy" snow events initially brings elevated temperatures, but then clearing skies and cold advection behind the system allow for rapid cooling.  Fresh snow cover is also very favorable for radiational cooling.

Out of curiosity I looked quickly at the long-term history of this phenomenon by taking a trailing median of the temperature drop associated with the prior 20 snow events, and then applying an extra 7-event smoother, see below: 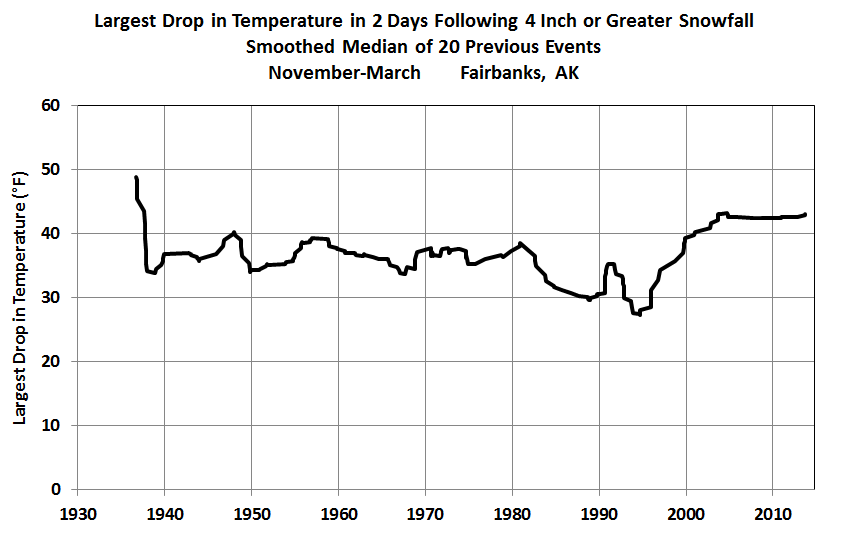 There have been some interesting variations in the past two decades, with snow events generally being followed by less cooling in the 1990s but considerably more cooling since 2000.  I have no useful suggestions on how to interpret this change, so I mention it merely as a point of curiosity.  But it's clear that this weekend's chill was exactly in line with the Fairbanks climate of the past decade.