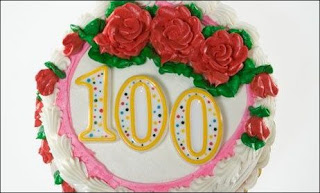 100 year anniversaries don't come around very often. This is one of those rare exceptions. You see, 100 years ago, June 27, 1915, the weather observer at Fort Yukon wrote down a high temperature of 100°F in their monthly log (see Figure 1). That's right, a triple-digit temperature – in Alaska. In the 100 years since then, the record has been approached a few times but never equaled. 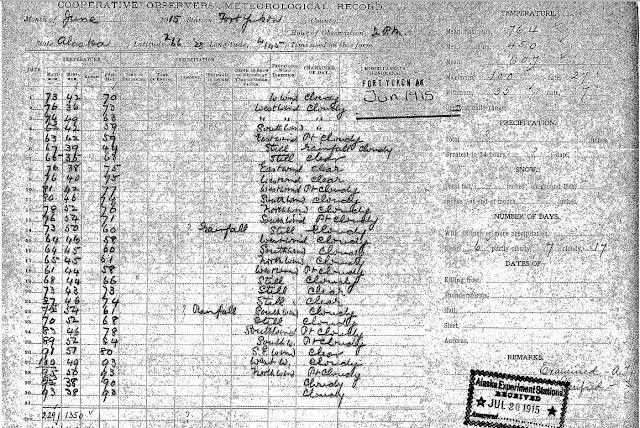 Even though the 100°F temperature is recorded on June 27th, it most likely occurred the day before – June 26th. This observer made their readings at 2 p.m. every day and so when they inspected the min/max thermometer at 2 p.m. on the 27th, the 100°F temperature indicator was probably left there from the previous day. The typical time for a high temperature in June is around 5 p.m. Standard Time. Having a 1-day offset of temperatures is a quite common occurrence for Cooperative stations all over the U.S. That being said, it will always be shown as a June 27th observation.

Is this temperature reasonable? The basic answer is yes. Rick did an analysis for a conference in 2009 that described the Fort Yukon reading as plausible. He noted that it was near the solstice, skies were clear, and other very warm temperatures were observed. Figure 2 shows the highest temperature observed in the last few days of June in 1915. 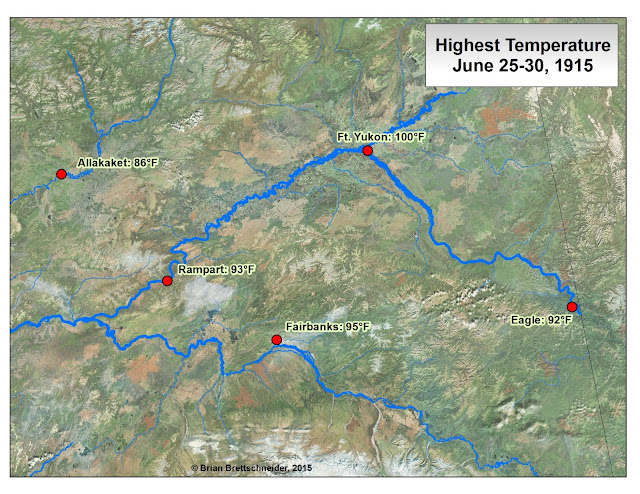 Figure 2. Warmest high temperature during the last six day of June in 1915.

In Fairbanks, the high temperature reached a scorching 95°F on June 26th (likely the same day that Fort Yukon reached 100°F). Remarkably, this temperature occurred at or shortly after noon. According the the Fairbanks Sunday Times, a thunderstorm with hail formed (hail noted on Cooperative observer form) and cooled off the city (see Figure 3) at noon.

If a thunderstorm had not cooled off Fairbanks so early in the day, it is entirely possible that they would have warmed by another 5°F. Also, since the 100°F temperature at Fort Yukon is only 5°F to 8°F warmer than the nearby stations, it is possible that a lack of clouds or a just-right wind direction allowed the temperature to jump a few degrees warmer than would ordinarily be expected. It is also possible the the reading is not valid. However, there is far too little evidence to toss the reading out. Therefore, it is the accepted state record.

So, congratulations to Fort Yukon on the 100th anniversary of the warmest official temperature in Alaska history!

Email ThisBlogThis!Share to TwitterShare to FacebookShare to Pinterest
Labels: Records