Parts of interior Alaska have been blanketed by smoke from wildfires in the past few days, and the smoke has become increasingly dense in Fairbanks.  The visibility reported at the airport was only 3/4 mile this morning, but the situation was even worse in Tanana, which was reporting less than 1/4 mile visibility owing to nearby fires.

It's been nearly 6 years since a comparable period of sub-1 mile visibility in smoke was reported in Fairbanks; early August of 2009 saw several days with these conditions.  Prior to that, August 2005 also brought heavy smoke, and of course 2004 was the summer of smoke; but this is the first time (since 1950) that such a heavy smoke episode has occurred so early in the year.

The chart below shows the climatological frequency of smoke being reported in the hourly observations; the peak is in the first half of July, with nearly 10% of all days reporting smoke.  However, the frequency peaks later in the summer for smoke that is more dense, as August smoke days are more likely to have low visibility.  In other words, when it's smoky in August, it's usually bad (median visibility of 1.5 miles in late August), but smoke is typically light in early summer (median visibility of 4.0 miles in late June).  This year's situation is very unusual. 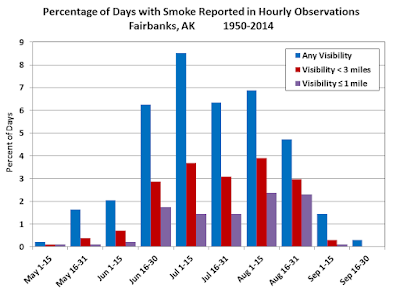 With all the smoke obscuring the sky in Fairbanks, daytime temperatures have been significantly suppressed relative to what they would have been otherwise.  For example, the computer MOS forecasts for the high temperature in the past 3 days were 86, 85, and 85 °F, but the high temperature actually only reached 82, 77, and 70 °F respectively (the MOS scheme does not account for smoke).  The National Weather Service did better, with forecasts of 82, 81, and 79, but still missed yesterday's high temperature by nine degrees.

Last year Brian discussed the cooling effect of smoke with an example from the Kenai peninsula.  I thought it would be worthwhile to look at the history in Fairbanks to see if a clear relationship exists between smoke and temperature.  First, I looked at the history of MOS temperature forecasts since 2000; the following chart shows the difference between the forecast and the observed high temperature, for summer days with smoke reported between 10am and 10pm, and with visibility on the horizontal axis (note the logarithmic scale).  The visibility is calculated as the mean between 10am and 10pm. 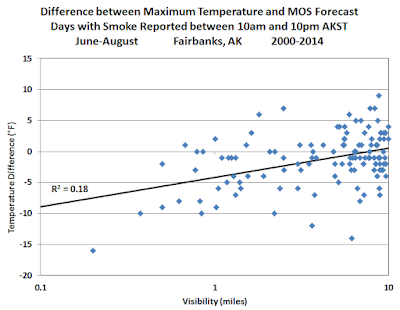 The chart shows the expected relationship, with most days seeing cooler temperatures than predicted when smoke is dense.  The linear regression fit is not particularly good, but the regression line does have a near zero y-value for visibility of 10 miles (the highest reported by the ASOS platform), which is what we would expect if the forecasts are unbiased for smoke-free conditions.

Another way of looking at the problem is to calculate the difference between surface and 850 mb temperatures and examine the relationship with visibility on smoke days.  See below for this analysis.  The idea is that smoke would not significantly affect 850 mb temperatures but would cool surface temperatures, so we expect to see a relatively cooler surface when smoke is dense.  Note that this analysis goes back to 1950 and uses pre-ASOS visibility observations, which were often greater than 10 miles. 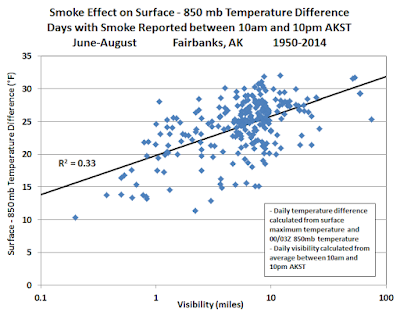 The cooling effect of smoke is clear, and the relationship is a little better than with the MOS analysis.  An alternative regression fit, using a second-order polynomial, is shown below; this seems a little more satisfactory in terms of capturing the drop-off in temperatures at sub-1 mile visibility.  Based on this analysis, it seems clear that smoke-caused temperature deficits can reach or exceed 10 °F in Fairbanks when the visibility drops below 1 mile; and this matches very nicely with what happened yesterday. 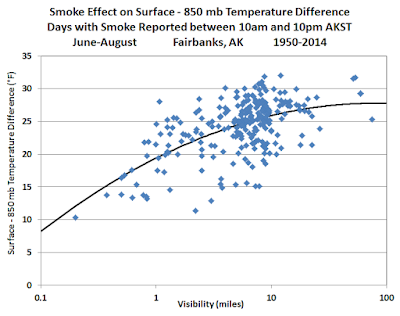 Here's an image from the SNPP satellite yesterday afternoon; Fairbanks is under the expansive, dense patch of milky white just to the right of center.  Individual fire plumes are visible in numerous locations. 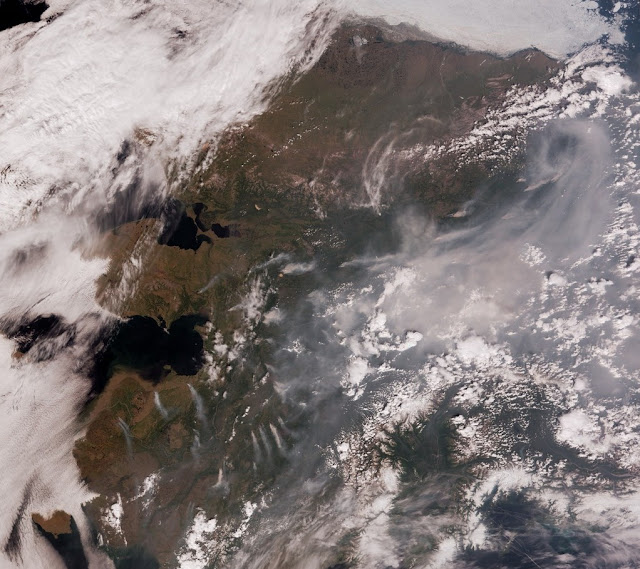