Another dramatic change of the weather pattern has occurred, as a strong and expansive upper-level high over southwest Alaska is now bringing unusual heat to the interior and especially to southwestern and south-central locations.  The map below shows the 500 mb height analysis from 3am AKST this morning, courtesy of Environment Canada.  Twelve hours earlier the 500 mb height was even slightly higher at Bethel and McGrath: 5870m, which is close to record territory.  It's actually the earliest in the summer than such a high 500 mb height has ever been observed at either location. 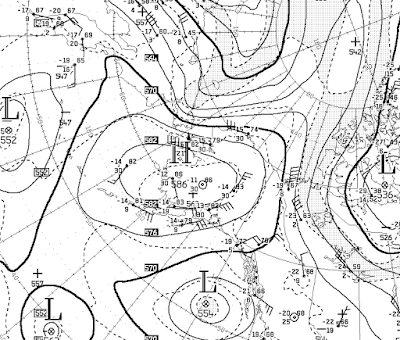 The pressure gradient at the surface kept a warm breeze blowing last night in many southwestern locations and led to some remarkably high overnight minimum temperatures.  For example, the lowest hourly temperature report was 68F at Dillingham, and Sparrevohn at 1600' elevation only dropped to 64F.  Note that the surface wind direction was northerly and thus blowing off the warm land mass rather than the cold ocean.  The temperature has risen to (at least) 88F this afternoon at Dillingham, which is close to the all-time record high of 92F (which occurred during the June 1953 event that set the all-time 500 mb height records in Bethel and McGrath - no surprise there).

The unusual warmth was also evident at Kodiak yesterday, where the high of 73F and low of 56F produced a daily mean departure from normal of +3.8 standard deviations.  This would be pretty extreme if the temperature distribution were Gaussian, but actually it's nowhere close to Gaussian, as we've noted before.  At this time of year, large positive temperature anomalies are much more frequent than large negative temperature anomalies, if we use the NCEI (formerly NCDC) 1981-2010 mean as the "normal".  For example, since 1981 the largest negative temperature anomaly was -1.9 standard deviations, but +2.0 standard deviations has been exceeded 60 times.  From a physical standpoint, this reflects the fact that there's no way for Kodiak to get much colder than normal in June, but it's not difficult to get unusual warmth advected from the mainland.  The current situation is a great example of this.

The chart below shows the histogram of June temperature anomalies within the 1981-2010 reference period.  Sometimes a Gaussian distribution assumption is a very poor one even for temperature. 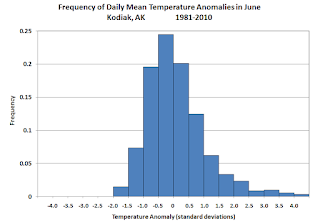