As readers of this blog are no doubt aware, one of the big stories of the past year in Alaska climate has been the strongly positive PDO phase.  However, in the background a weak El Niño episode has been prevailing since October in the equatorial Pacific Ocean, and in recent weeks the El Niño conditions have strengthened while the PDO index has decreased significantly.    Based on recent trends and current forecasts, it appears likely that the El Niño episode will soon take over as the dominant anomaly in the Pacific Ocean; so we will probably be discussing El Niño in more depth in the coming months.  The figure below shows the latest weekly sea surface temperature anomaly; we can see that the band of warm water along the equator in the Pacific is becoming quite pronounced, while the North Pacific's PDO signature is now rather indistinct. 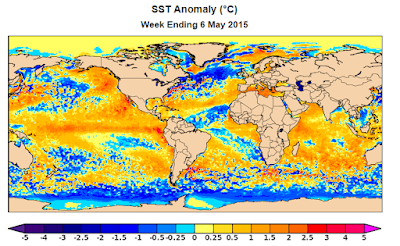 The main reason to believe that El Niño will continue to strengthen is a strong consensus of very dramatic forecasts from the leading seasonal computer models.  For example, the figure below shows the latest Niño3.4 SST anomaly forecast from NOAA's CFSv2 model (see here for the definition of the Niño3.4 region).  The model shows the area-average SST anomaly exceeding

Here's a map of the November mean air temperature anomaly, from the ensemble mean of the CFSv2 model forecast: 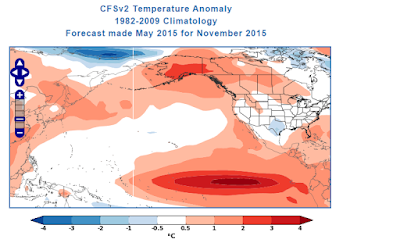 What does a strong El Niño episode mean for Alaska weather and climate?  Well, if the episode persists into winter, it will have profound effects that we can discuss at another time (see here for published work on the subject).  At the moment I'm interested in potential effects for summer in the interior.  The scatter plots below show June-July mean temperature and June-July total rainfall in Fairbanks versus an index of ENSO (El Niño - Southern Oscillation) activity.  Note that I removed the long-term temperature trend in an attempt to get a clearer picture of the effects of ENSO in isolation.  The results show very little correlation between ENSO and Fairbanks temperatures in high summer; however, there is a hint that El Niño is more favorable for dry conditions than La Niña. 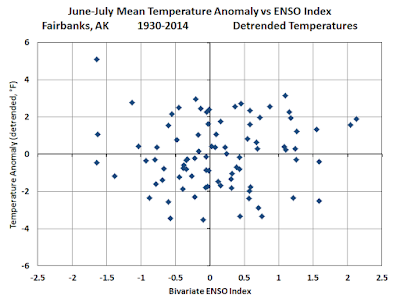 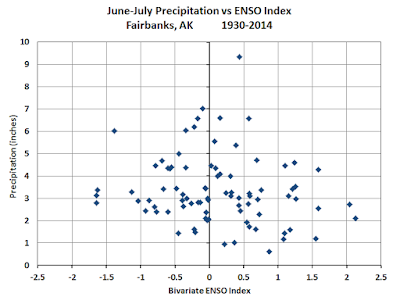 Looking ahead to the August-September period, there is an interesting clustering of relatively low temperatures during near-neutral ENSO conditions, and both strong El Niño and strong La Niña conditions appear to be somewhat favorable for warmth in Fairbanks.  We also see again a slight tendency for drier conditions during El Niño.  But the scatter is very large, which is no surprise as predictability is usually low for seasonal climate anomalies over land, especially in summer. 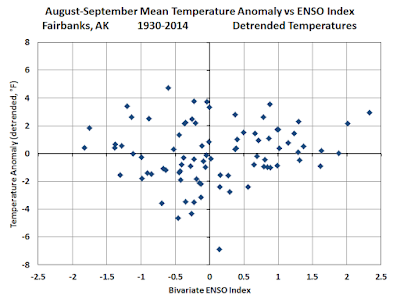 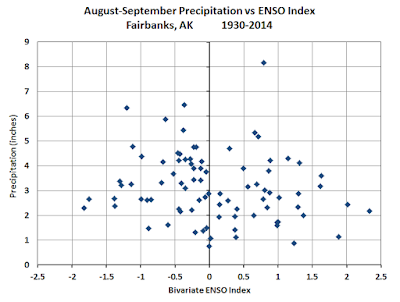 Out of curiosity I also created the equivalent charts for the PDO index in June-July and August-September, see below.  Except for some clustering under the most strongly positive PDO conditions, there appears to be very little correlation between the PDO and Fairbanks summer weather. 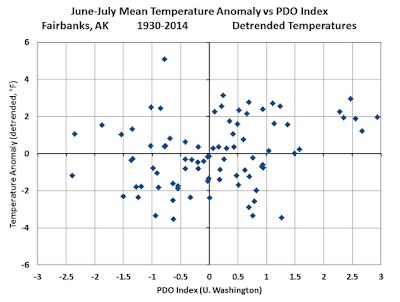 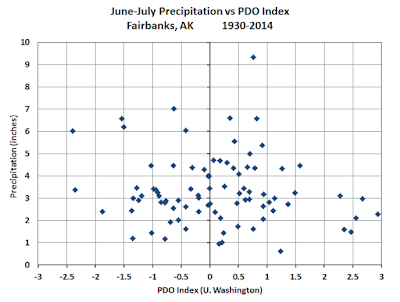 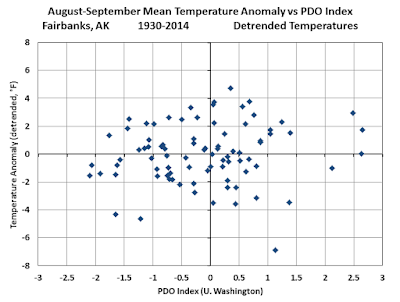 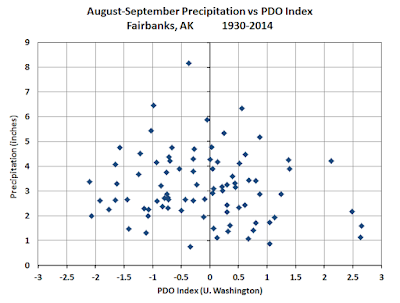 In conclusion, if El Niño continues to strengthen in the coming weeks and months, it will introduce a slight propensity for dry weather this summer in Fairbanks, and in August and September the odds will tilt slightly in favor of unusual warmth.  Interestingly, however, NOAA's forecast for June-July-August indicates that moist conditions are slightly more likely in the southeastern interior, see below.