Last week I noted that strong El Niño conditions in the tropical Pacific Ocean do not preclude unusual cold in Fairbanks.  However, it's a little more surprising that below-normal temperatures have occurred statewide recently in conjunction with a positive PDO phase, and the recent cold in Anchorage stands out as an unusual event in this regard.  A daily record low temperature was tied on the 18th (-8°F), and record low maximum temperatures were tied or broken on 3 of 4 days from the 15th to the 18th.  If it weren't for the November 1989 cold spell, Wednesday's high temperature of +3°F would have been the earliest on record for such a cold day in Anchorage.

Looking at weekly numbers, the week ending November 19 was 16.3°F below normal in Anchorage, which has only been observed a handful of times in the past 20 years in November (most recently in 2011).  In view of the fact that the PDO was significantly positive in October, and a positive PDO favors unusual warmth, this is surprising. 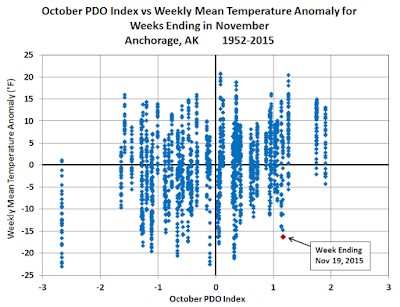 Here's a comparison between recent weekly SST anomaly maps, showing that the positive PDO pattern has largely disappeared in the past month, so the November PDO index will be lower than October, but almost certainly still positive.  North Pacific waters remain warmer than normal overall. 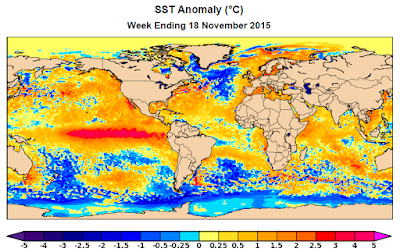 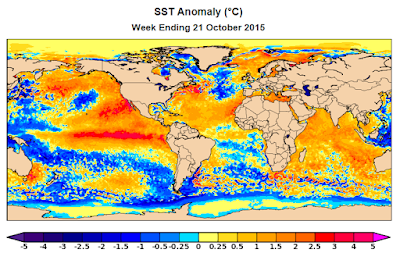 In the interior, the first -40 temperatures of the season were observed with the recent cold spell.  These included: