Frequent light snowfall over the past 12 days has brought the snow depth up to 6 inches in Fairbanks, which while still modest, is actually above the long-term normal of 5" for this date.  A more substantial snowpack is in place now in the hills; for example, the Keystone Ridge COOP (1600' elevation) is reporting 16" on the ground, which is the most for this date since 2004.  The SNOTEL sites to the northeast of Fairbanks are reporting between 11" and 20", as seen in the map below (click to enlarge and view the small icons). 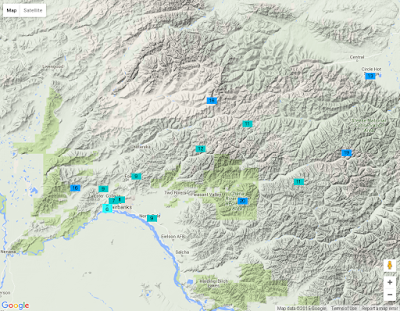 The onset of relatively snowy weather in the interior is not too surprising in view of the highly positive phase of the North Pacific Mode.  The NPM index in October was the second highest on record since 1900, and according to station data since 1950, a positive NPM phase tends to bring above-normal precipitation to interior Alaska.  The map below shows the percentage of years with above-normal precipitation in October through December when the October NPM index was strongly positive.  More details on the NPM influence can be found in the slideshow from my UAF talk back in September: 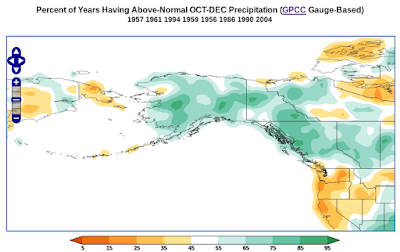 [Update November 10: another 2.3" of snow yesterday brings the snow depth to 7" in Fairbanks as of midnight.  This is now the snowiest start to November since 1990, and 4th snowiest on record.  The season-to-date snowfall of 33.5" is the 3rd highest on record.]