I'll have more on the topic of "snowiest place in the interior" soon - and thanks to readers for comments - but today I just wanted to point out the remarkable accumulation of snow that's been reported from Keystone Ridge in recent weeks.

As of Wednesday evening, the cooperative observer on Keystone Ridge reported 32" of snow on the ground, which is greater than a normal winter's peak snow depth of 28".  Only 5 previous winters (in 1996-present) produced a snow depth greater than 32", and the all-time record is 48". 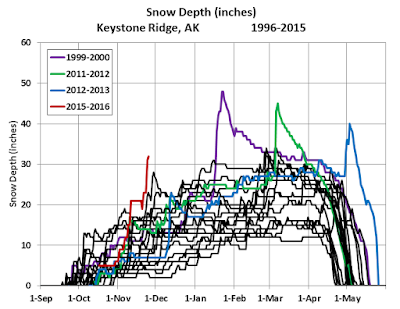 It's worth pointing out that the Keystone Ridge coop station changed hands this summer; the new location is about 3/4 mile west of the old location, but the elevation is nearly identical and both locations are close to the ridgeline, so it seems unlikely that there would be significant systematic differences in snowfall.  The November to-date liquid equivalent precipitation is 2.85", which is the highest on record for the month of November and therefore consistent with the record snow depth.

By way of explanation, I would point to the anomalous west-southwesterly flow that has affected interior Alaska this month.  The normal 850mb flow direction is southeasterly at this time of year (first figure below), but this year there has been a pronounced westerly anomaly bringing moist air inland (second figure below).