Are Fairbanks Septembers Getting Snowier?

Rick T. here for a guest blog on Deep Cold. While we're still waiting for the first snow of the autumn in Fairbanks, Richard and I have been discussing whether there is evidence that Septembers are getting snowier. Below is the plot of September snowfall since 1920. The observation sites used for these data are the Ag Farm (now at UAF) 1920-29, Weather Bureau downtown (1930-1942), Fort Wainwright and Weeks Field (1943-1950) and Fairbanks International (1951-present). It's possible that observations prior the Weather Bureau becoming the "observer of record" are slightly low: cooperative observations generally measure less snow in the long run than Weather Bureau/Weather Service locations as cooperative observers typically make only one (two if we're lucky) snowfall measurements a day.

I've also plotted the 10-year running median snowfall. As you can see, the 10-year median has varied from a trace to 0.4". While five of the six Septembers with more than five inches of snow have occurred in the past 25 years, my impression is that there is no trend here, just random variation that includes a couple of big outliers. But of course, my impression is not evidence. Can we do some statistical work to help answer, in a more objective fashion, the question: do we have evidence that Septembers are getting snowier, or are 1992 , 1993 and 2015 just rare events that do not signal any large scale change in September snowfall? 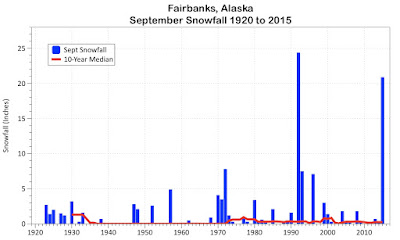 The first thing to notice is that we have 96 years of data. This seems like a lot, and it is a lot for climatological work in Alaska, but the presence of the two outliers is a big complicating factor. Notice that only two Septembers have had more than eight inches of snow, and both of those had more than twenty inches. The other complicating factor is that, unlike, say, temperature, snowfall has a natural lower limit of zero, and that exactly zero occurs with some frequency.

So, the question we want to investigate is: do recent September snowfalls mark a change in the "expected" values? That is, do we have evidence that, say, the normal is changing, or that the heavy snowfall Septembers are more likely now?

To start, here is a histogram of total September snowfall for all 96 years: note the bin sizes are not equal. 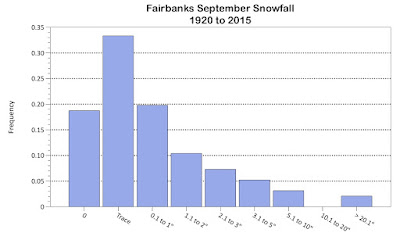 We can fit a variety of distributions to the observed values, but of the common distributions, a gamma provided the best fit. However, the gamma distribution is defined only for positive numbers, but since 18 percent of 1920-2015 Septembers having exactly zero snowfall, this seemed like a non-trivial limitation. So I opted for a tweedie distribution, which elegantly handles the exact zeros (and the gamma is a special case of the tweedie). So here's what I did:

Steps 1 and 3 are illustrated above. The histogram on the left is the outcome of 50 random selections from the September as actually observed: 44 years had 2.5" or less of snow, five years between 2.5" and 5", and one of the big outliers was picked up. From this we fit a tweedie distribution, and then draw 50 random values from the fitted distribution. The result is the histogram on the right. Unsurprisingly, it's a little more "spread out" and has a couple of high values (10.1" and 18.4"). We then repeat this 1000 times, keeping track of some information from each simulation (so that's 50,000 Septembers snowfalls we've simulated).

Since we're interested mostly in the high (snowy) end of the distribution, here's how maximum values in the 1000 simulations of 50-year September snowfalls shake out. The low values seem pretty realistic, but 16 percent of the simulations have maximum values higher than any observed in the real world (to date). It is kind of fun though to think about what it would take meteorologically to produce a 50" September snowfall in Fairbanks :) 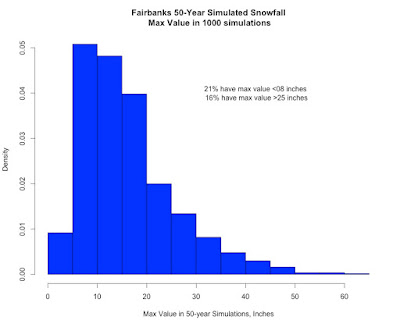 So having said that, if you're still with me and have suggestions on improving this analysis I'd love to hear them. This work is the outcome of my working to learn to do statistical analysis and coding in R, and I (and Richard) thought Deep Cold readers might find this statistical noodling of some interest.

Technical note: in this analysis the observed September snowfall are summed from the daily values, and I have assigned small but none-zero values to days with "trace" snow. I've assigned that value to be low enough so that no number of days with trace values could sum to (with rounding) reach the lowest "measurable" amount (0.1").
Posted by Rick at 7:37 PM