With the changing of seasons in Alaska I often find myself pondering the nature of seasonal variations in atmospheric physics.  An example of this is the connection between cloudiness and temperature, which varies drastically through the year in interior Alaska.  We've seen previously that more abundant cloud cover is strongly associated with higher temperatures in winter and lower temperatures in summer in Fairbanks, owing to the effects of clouds on the net radiation gain or loss at the surface.  But what is the "breakeven" date for the effect of cloud cover on temperature?  In other words, at what date in the autumn does the climate transition from clouds having a net cooling effect to clouds bringing relative warmth?

The chart below helps answer this question; it shows the correlation of cloud cover with temperature by date, calculated over 31-day running windows of dates through the year.  Note that I sorted the cloud cover amounts and used the rank of cloud cover rather than the actual cloud cover values, to help reduce complications with the skewed and bounded distribution of cloud cover. 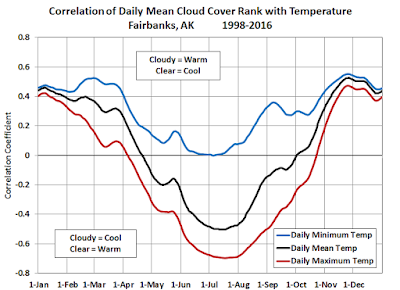 The results show that cloud cover is positively correlated with daily mean temperatures from October 2 to April 20, or more than half the year.  However, there is a strong contrast between the response of daily minimum and maximum temperatures, as we would expect: enhanced cloud cover reduces daytime high temperatures from April 6 to October 22, but daily low temperatures are nearly always warmer when it's cloudy.

The most interesting aspect of the results may be the absence of correlation for daily minimum temperatures at the very peak of summer in Fairbanks: for the 31-day period centered on July 5, there is actually a tiny negative correlation between cloud cover and low temperatures.  This is illustrated in the scatter plot below.  Remarkably, this means that clear conditions are no cooler than cloudy conditions during the "nighttime" hours of high summer.  As I understand it, this curiosity arises because the nights are too short for longwave radiation processes to become dominant over the shortwave radiation influence of the day.  At any other time of the year, the sun goes away for long enough to allow surface temperatures to respond to the cloud-modulated longwave radiation from above; but in high summer the minimum temperatures are just as much influenced by how much solar heating there was during the previous day. 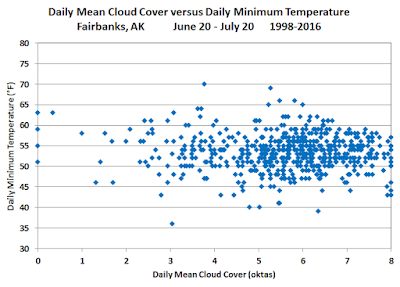 While I was at it, and for future reference, I also created a similar correlation chart for 850mb temperatures - see below.  Daily high temperatures are more closely connected to conditions aloft than daily low temperatures for most of the year, as solar heating allows air from aloft to mix down to the surface by day.  However, this process is largely inoperative during the darkest period of the winter. 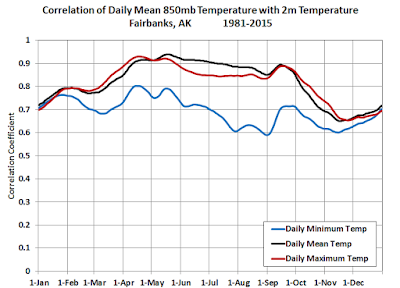