With distinctly autumnal weather now occurring in parts of the state, it seems like a good time to look back at the 2016 fire season.  Extremely warm conditions last winter and spring raised concerns about fire activity in the early part of the season, but the June 1 wildfire outlook called for normal fire potential for the summer months, and this turned out to be a good forecast.  The total acreage burned as of today is just slightly under half a million acres, which is about 25% below the 1996-2015 median.  Compared to last year's extreme fire season, it's been a very benign year. 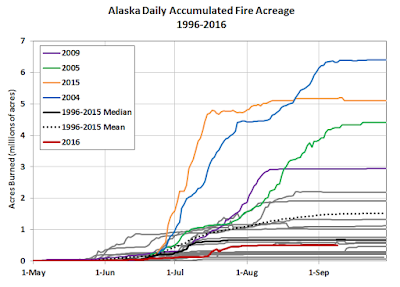 The only period of really significant fire activity this summer was triggered by the mid-July heat wave.  In the week ending July 21, nearly 300,000 acres burned, or well over half the season's total; but this is not unusual.  The 1996-2015 median for peak 1-week fire acreage is 324,000 acres, so it is typical to see at least one week of bad fire conditions at some point in the summer (but usually before the middle of July).

The chart below compares this year's monthly fire acreage to the historical distribution; the pink columns show the historical range (minimum to maximum), and the black dashes show the median for each month.  Note the logarithmic vertical axis.  Only July saw above-median fire activity this year; all other months were quieter than normal owing to the wet conditions that prevailed over much of the interior for most of the summer. 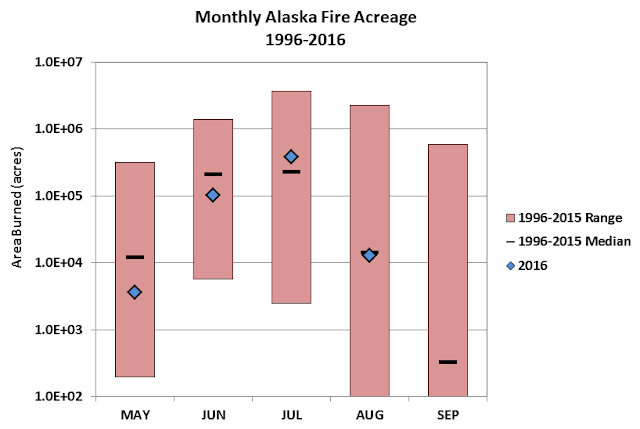