At various times on this blog we've discussed the long-term increase in summer daily minimum temperatures in Fairbanks, for example in these posts:

The trend towards later first freeze dates at the airport has also been a repeated topic of discussion (just search for "first freeze").  Spurred by a comment from reader Gary, I thought it would useful to look again at summer humidity trends as a possible part of the explanation.  Back in July I looked at dewpoint measurements at the airport and showed that humidity has increased at the surface in June and July.  But what about aloft?  The chart below shows the monthly linear (least-squares regression) trends for temperature and dewpoint at 850mb, using only the 3am balloon soundings as I'm interested in overnight minimum temperatures.  I began the analysis in 1958 because prior to the International Geophysical Year the soundings were released at 6am, and I wanted to keep the observation time consistent; and also I'm a little less confident of the early humidity sensors. 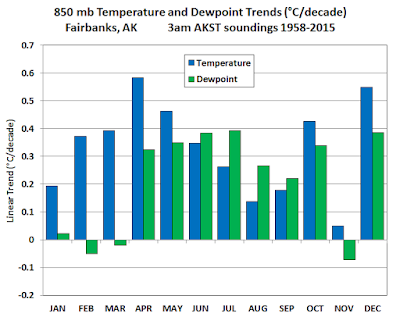 An interesting aspect of this chart is the absence of warming in November followed by the pronounced warming trend in December, but that's a topic for another day.  The humidity trends reveal an increase in dewpoint above Fairbanks throughout the warm season, and this is consistent with higher minimum temperatures regardless of the temperature trends.  Water vapor is a highly effective absorber and emitter of longwave infrared radiation, so increased humidity leads to greater downward radiation and therefore reduces the rate of net energy loss when the sun is low in the sky or below the horizon.  Anyone who has experienced high humidity in the tropics can attest to this effect: when humidity is very high, the surface temperature may drop only a few degrees on a perfectly clear and calm night over land, because the surface is bathed in infrared radiation from aloft throughout the night.

It's also interesting to see that the dewpoint trend is higher than the temperature trend in June through September, and especially in July and August, and this means that the relative humidity has increased over time; see the chart below.  All else being equal, one would expect higher relative humidity to correspond to greater cloudiness, and of course the presence of clouds is a strong warming influence on daily minimum temperatures. 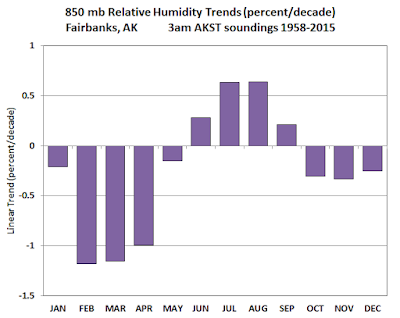 The chart below shows the contrasting trends in 850mb relative humidity in February and August.  Note that the drying trend in February isn't related to decreasing dewpoint but rather to increasing temperatures, as shown in the first chart above.  Also I'd caution that these trends have been observed over a relatively short period - we know that there were major climate anomalies in the 1930s in Alaska, for instance, so the trends would no doubt look different if we had good upper-air data from earlier years. 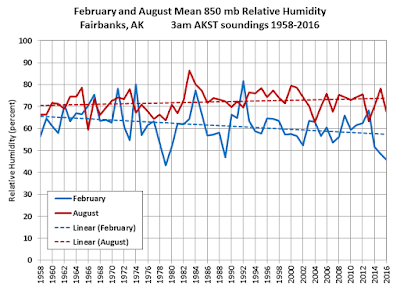 Finally it's interesting to take a quick look at the relationship of 850mb dewpoint to the date of first freeze in Fairbanks.  By trial and error I found that the mean dewpoint in the period August 27 - September 8 is most closely related to the first freeze date, with a modest correlation - see the chart below.  Interestingly the correlation is slightly lower for temperature at 850mb; the dewpoint aloft explains a bit more of the variance in freeze dates than the temperature aloft.  As we would expect, when it's dry aloft, frost tends to come early, but when it's humid, the first freeze is delayed. 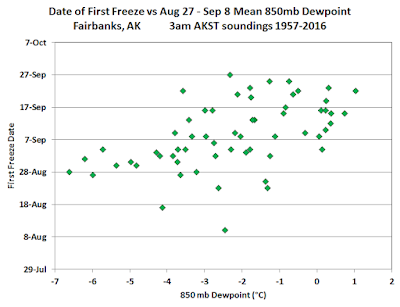 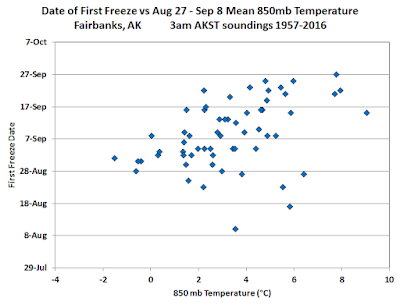 Posted by Richard James at 5:03 AM