Rick's post on the climatological chances of reaching various warm temperature thresholds in the remainder of summer led me to wonder how these "exceedance probabilities" have changed over time.  The chart below takes a very simple look at this by showing the probability curves for years prior to 1976 (solid lines) and years since 1976 (dashed lines). 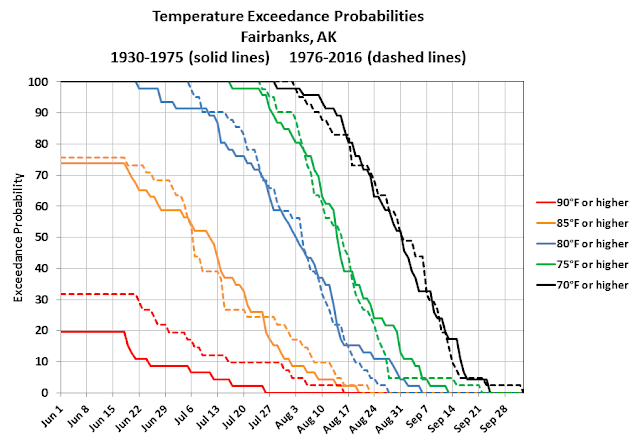 Perhaps surprisingly, the 90°F threshold is the only one with a distinct systematic difference between the two periods.  Clearly 90+ temperatures have become more common in recent decades, but none of the other curves show pronounced or consistent differences throughout the summer.

Part of the explanation for the lack of difference is that summer-time daily high temperatures have not warmed very much over the long term in Fairbanks.  In terms of high temperatures, June through August in the latter period (1976-2016) was less than 1°F warmer than the earlier period; whereas daily low temperatures were nearly 3°F warmer.  If we created a similar chart for probabilities of warm nights rather than warm days, I'd expect to see greater differences.  I'll see if I can add that chart tomorrow. 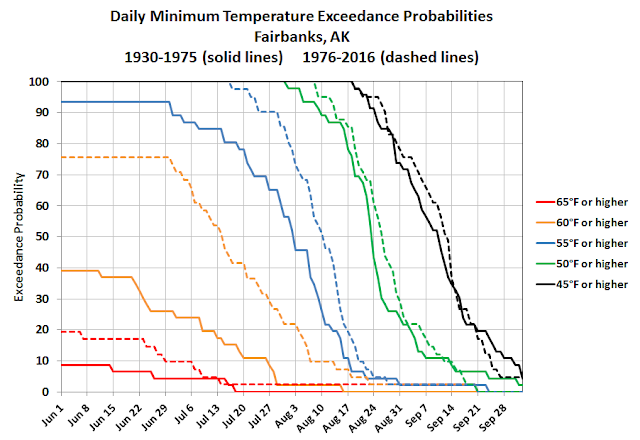 As expected, the differences are more pronounced for warm nights than for hot days (the term "night" being used loosely for the height of summer).  The probability of any given summer having a daily low temperature of 60°F or above nearly doubled from 39% to 76% between the two periods, and this trend has continued in more recent years; the only year in the last 10 years without a 60+ minimum temperature was 2011.  It's worth noting also the stark difference for August: a 60+ minimum temperature was not observed in August prior to 1974, but it has happened 15 times since then.

The stronger warming trend in daily minimum temperatures is probably caused by a combination of urbanization influences (more heat-storing asphalt etc) and higher humidity derived from warmer ocean surface temperatures surrounding Alaska.  These effects are less significant during the day because the lower atmosphere is generally well-mixed and the afternoon surface temperature is closely tied to temperatures aloft and the amount of sunshine at this time of year.