Regular readers will know that Alaska has a reasonably dense network of realtime temperature observations these days from remote automated weather stations (RAWS) that have been deployed by various agencies.  Data from 92 of these sites is archived in NOAA's GHCN data set, but the Western Regional Climate Center lists more than twice as many stations in Alaska on their website.

As someone who is interested in climate monitoring for Alaska, I've been thinking about whether it's possible to make the RAWS temperature data more useful for climate monitoring purposes.  For example, back in April we noted that NOAA's climate division analysis for March temperatures in the North Slope region seemed quite unrealistic; the reasons for this are not clear, but it's tempting to think that the modern wealth of RAWS data could help provide a better picture.

However, quality is a perennial issue with RAWS temperature data.  One of the most significant problems is one that we've mentioned many times here; RAWS thermometers are not artificially ventilated, so they nearly always read too high when the sun is shining strongly and winds are light.  The difference can be on the order of 10°F, which renders the data much less useful for climate monitoring.  This kind of issue can really degrade the analysis and conclusions if one isn't careful; here's a paper showing major impacts from a different kind of bias in SNOTEL temperature data.

Oyler et al., 2015: Artificial amplification of warming trends across the mountains of the western United States

I decided to take a closer look at the RAWS solar warming effect by examining data from RAWS sites that are located close to higher-quality FAA instruments.  So far I've identified just 3 locations where the RAWS and ASOS/AWOS thermometers are in fairly close proximity and at similar elevation: Fairbanks, Eagle, and Lake Minchumina.  Here are scatter charts of daytime hourly temperatures from the past 8 years, for a calendar period of about 45 days either side of the summer solstice; this is the season of peak solar heating (although cloudiness increases as summer advances).  I've also restricted the analysis to times of the day (about a 10-hour period) in which the climatological normal solar radiation is above a certain threshold - what I'm calling peak sunshine hours. 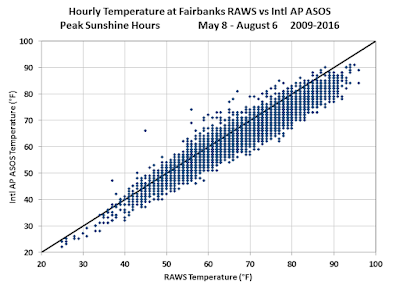 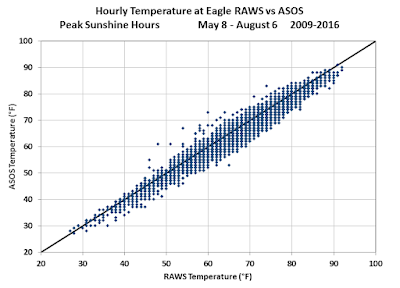 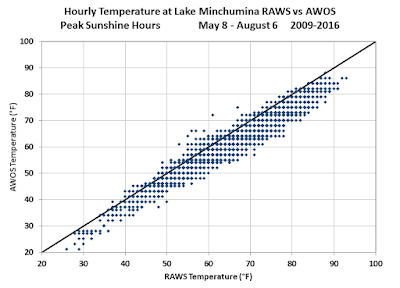 As we would expect there's a very good correlation between hourly temperatures at all three sites, but in the case of Fairbanks there's a distinct indication that the RAWS temperature is more often significantly higher than the ASOS temperature when the weather is warmer.  We would expect to see this if strong sunshine creates a warm bias at the RAWS thermometer, because hours with strong sunshine will tend to be warmer anyway (all else being equal).  There's a hint of the same relationship at Lake Minchumina, but not at Eagle.

To highlight the dependence on solar radiation, I plotted up the temperature difference at each pair of sites against the hourly total solar radiation as reported by the RAWS instruments - see below.  Now the relationship is quite striking and there's no question at all that strong sunshine tends to produce a substantial warm bias in the RAWS temperature measurements.  The charts for Fairbanks and Lake Minchumina are quite similar, but the bias is much less evident at Eagle. 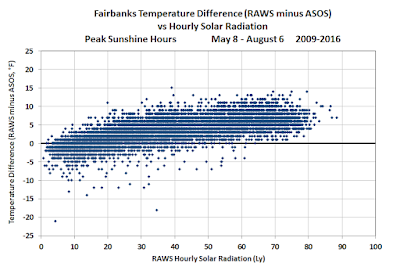 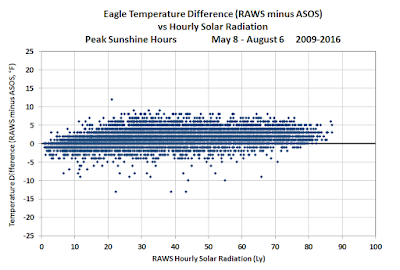 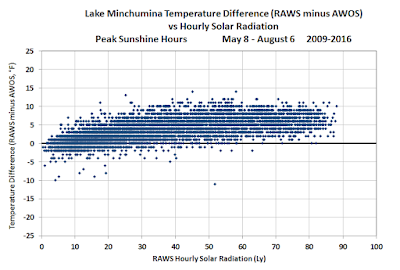 In an attempt to describe the relationship mathematically, I came up with an analytical expression for the temperature bias and then fitted the coefficients of the expression using an optimization routine for each site separately.  Here's what the curve looks like; it seems to do a reasonable job of describing the effect of solar radiation. 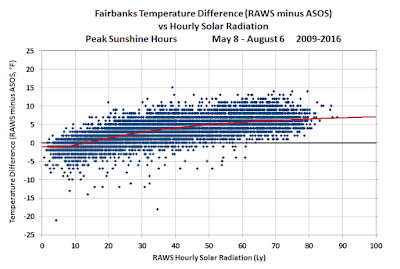 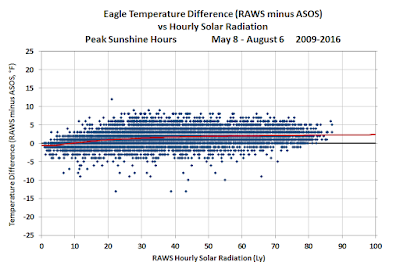 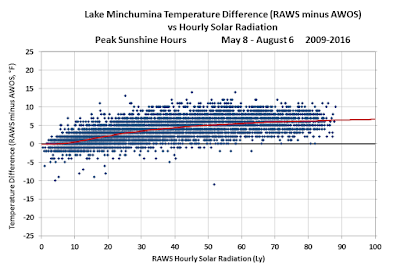 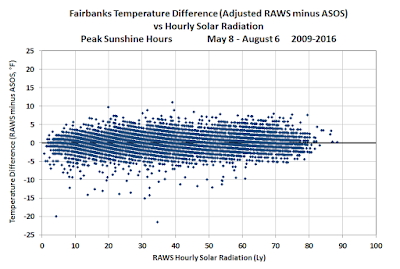 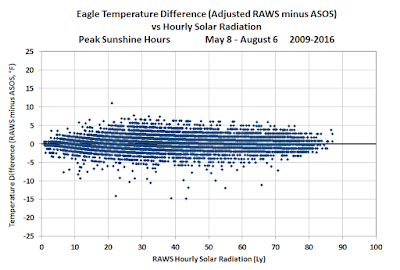 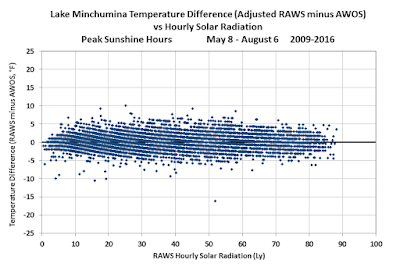 The next step in the analysis will be to look at the impact of wind speed, because breezy conditions tend to reduce the warm bias that occurs when it's sunny; look for some more scatter plots in a subsequent post.

But for now, this is an encouraging start - in particular, the similarity of the solar radiation impacts at Fairbanks and Lake Minchumina suggests that it may be possible to apply a universal correction to all temperature data originating from RAWS instruments that are similar to these two sites.  I'm not sure what's going on at Eagle - the relative absence of a solar warm bias is mysterious - but perhaps there's a difference in instrumentation.

And finally, if anyone knows of any other RAWS installations that are close to FAA sites, let me know - it would be great to add more sites to the analysis.